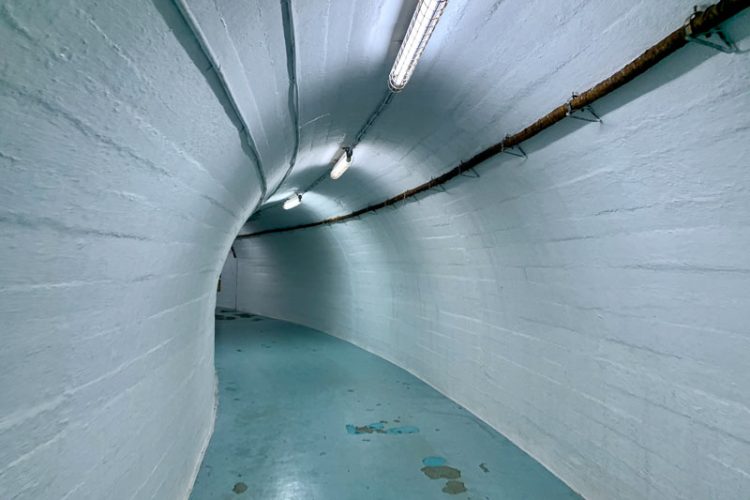 Konjic is a picture-postcard town hidden in the mountains. It is crossed by Neretva river, that has once been dammed and so the Lake Jablanica was created. There are theories that the dam construction was just a red herring of building of top-secret atom bunker for Josip Broz Tito and other 350 intended. The bunker was caved in the rock to the South of Konjic. Nowadays, you can take a guided tour in the bunker. At the same time, it is a venue for biennale, in terms of which the artists from all around the world present their art pieces.

If you are ready for everything, nothing can surprise you

Marshal Josip Broz Tito was an exceptionally foresighted and careful leader. He wished to prevent the country to be occupied by enemy in case of a world war III. He planned construction of a network of “fortresses” that should ensure defensive power of the country in case of attack, even atom attack. He built a network of atom bunkers across the whole territory of former Yugoslavia whereas the one near town Konjic was the one dedicated to Tito personally as well as to another 350 members of the political elite. Apart from that he also built three secret submaringe ports. One is located on the Vis Island, another one on the Lastovo Island and the third one is to be found near Šibenik. Noteworthy is also an air base located near Željava, a small village on the Croatian-Bosnian border. It had been carved into the rocky mountain Plješevica and nowadays, it is abandoned since it had been destroyed during the war in the ealy 90’s.

Construction of the bunker near Konjic sometimes known as ARK D-o (Atomska Ratna Komanda)  had started back in 1953. It had not been finished before 1979, just one year prior to Tito’s death. It is remarkable that they succeed to keep the construction as well as existence of the bunker secret. This is a good spot to remark that the whole documentation to the bunder must stay secret until 2049. That is the reason why nobody knows who was the architect of the bunker, who were those 350 possible bunker inhabitant or how long could they survive in the bunker, alternatively whether Tito personally had ever visited the bunker. All verifiable information is being presented by the guides during the tour. And we definitely recommend the tour. It is not only that the subject of the tour is very interesting. Everything you learn during the tour is extremely interesting. As a bonus, you get the opportunity to travel in time. Entering the camouflage house you find yourself back in the 50’s.

The best of 50’s fully preserved

The bunker was built in the U-shape. It has two entrances. Both camouflaged by two ordinary detached houses. They can be reached via a narrow road alongside the Neretva river.

In the block Nr. 11 you can find a tank full of drinking water. Its capacity is not measured precisely and there is no information available for how long could it supply the bunker. Anyway, there is a 250m long shaft reaching the Neretva river that enabled the bunker inhabitants to refill the drinking water supply at any time. On the photo you can see the filtering system. According to the guide’s information, the system is still 100% functioning.

As for the electricity, the bunker had been fed from the public distribution network. In case of outage, the plan B was a water power plant located on the Neretva river. Should this plan not work out, there was still the possibility to use two huge gasoline aggregates to produce electricity. They both are located in the block 10. The fuel for them could be stored in two gigantic tanks. The anti-fire system demonstrates the best technology solution of that time. There are two sensors located above the tanks – one detecting smoke, the other one heat. From the ceiling pipes and sprinklers are lead. The anti-fire system in this block was able to extinguish fire within 8 seconds.

In the block 6 you will find a telecommunication exchange. There is a system able to connect and communicate with all the other bunkers sprinkled across former Yugoslavia.

Received messages had been decoded in the next room full of fully functioning Siemens teletypewriters designed to send and receive teleprints.

Next to this room an officer was supposed to be seated whose task would be to read all the teleprints and decide which of them would receive Tito personally. Whole three rooms in the bunker were dedicated to store the teleprints since all of them were supposed to be archived. You can never tell in the case of atom attack, which message is the key one and which are or are not true.

In the block 9, an extremely effective air condition system is located. It is still working and even today it keeps around 24 degrees Celsius and 60-70% air humidity in the bunker.

In the block 5, a couple of bedrooms for ordinary inhabitants of the bunker and staff can be seen. They are furnished with bunk beds, wardrobes and writing desks.

Also the meeting room with capacity about 60 seats is located here.

The block 8 consists of two floors. Here the living blocks of generals as well as the one of Marshal Tito are located. Tito was first of all a soldier. That is why neither in the bunker, nor in his living block you can find any luxury. The top what he afforded was to decorate the walls with the very same silk wallpaper he used in his villa. It is notable that his bathroom was equipped with a toilet and a bidet. Today you can find there the original toilet paper from the 70’s.

You do this for Tito. Do not ask anything!

How come that the system succeeded in keeping this project secret? The guide explained to us that during his life Tito was for all the citizens such an authority that it was sufficient to say: “You do this for Tito. Do not ask anything!” And they were OK with that. Each block was built by a new brigade. After they finished their job, they never returned to the construction site. Apparently, nobody knew how the whole construction looks like. After the bunker was finished, only 3 generals and 13 soldiers who maintained it, were aware of its existence.

It is more a coincidence, that today we have the opportunity to visit the bunker and to travel in time walking through its blocks. The Bosnian Army got the same order regarding this bunker as regarding the Željava air base – to destroy it completely. Fortunately, the soldiers either did not follow this order or they simply did not have time to perform it.

As for our opinion, visit of the bunker was definitely a unique experience. We perceived it not only as a rarity, but most of all as a witness of old times testifying not only about the political situation but also about the technical forwardness, foresight and consistency. And so, we answer the question whether to visit this bunker: “Absolutely yes!”

Related Articles
3 tips on what to see in Jajce
The darkest adventure: Željava air base
3 years, 10 months, 3 weeks and 3 days: Sarajevo – life in the siege