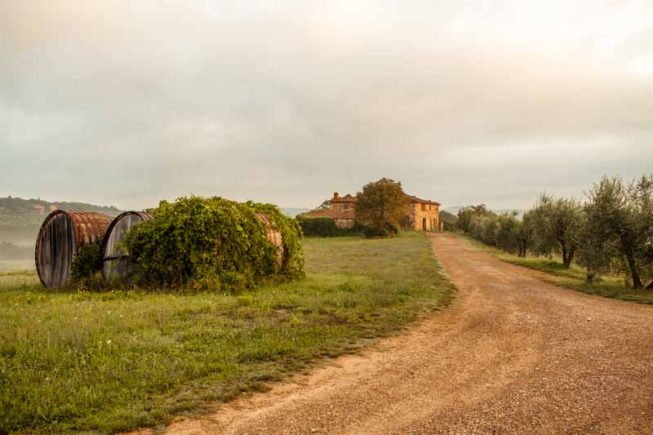 If Tuscany someday enchants you to such extent that you decide to go there, maybe you will meet a nice, always positive minded Slovak with catchy laugh, Anna Sterbakova. Anna moved to Tuscany with her husband who is Italian and together they run a cosy agriturismo Tenuta Branca (www.tenutabranca.com). Apart from that they also produce olive oil and wine.

Since Anna has been living and running business in Italy for quite a long time now we were interested in learning how she perceives the Italians, their country and traditions. We also wanted to know how the Italians perceive her. Answers to these and other questions are available in the interview below.

You have been living in Tuscany for 10 years now. What did it charm you with?

I have to correct you a bit; I have been living here for 12 years. And if there was not a man at the beginning who charmed me, I doubt that I would have ever considered the option to live here. I was never keen of countries with warm climate. I was rather attracted by countries as Norway, Sweden, Scotland, Ireland, Finland. Of course, I will visit those countries someday but then I will take your advice on what is worth to see, experience and learn there. (Laughter).

Anyway, without Stefano I would probably forever remain stunted of the charm of this country. There is a great number of things that I like and love here. 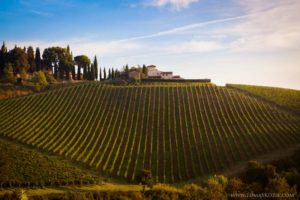 On the first place is definitely my new family, which I “gained”. I can’t separate it from what I mean when I say “Tuscany”, can I?
As an average and impatient cook I absolutely appreciate the simple, quick and tasty Italian cuisine – pasta, risotto, antipasti. Of course, also great wine, exquisite olive oil and local specialties such as truffle, fresh fennel and other delicacies are part of it. By the way, many of them I got to know only in this “new home”.

History, culture and traditions are literally drawn with the authenticity here. They have some kind of esprit of former times that sometimes works miracles and can transport in time.

Last but not least is the nature here. I will never get tired of watching the amazing sunrises and sunsets, of the fog lying in the dales and of the various colors and flavors of this country. Under any weather condition, in any season the nature here creates unforgettable scenes.

There are many stereotypes associated with the Italians – la-dolce-vita lifestyle, matriarchy in the family life, weakness for good food, as well as noisiness, unpunctuality. What is your experience with those stereotypes – are they real or are some of them misleading?

(Laughter). I do not have any standard measure for this. It’s very various. Although our family definitely cannot be considered a typical Italian family, all above mentioned stereotypes are relevant. (Laugter again).

On the first place is the unpunctuality. Vanity as well – it especially concerns their pride of the Tuscany cuisine (including their unsalted bread). I would add one more characteristic that is missing on the list. Italians are confirmed blandishers. They don’t hesitate to use compliments even in relation to newborn children. 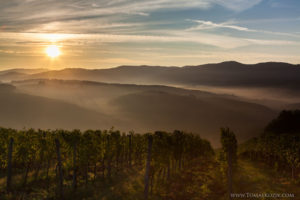 There is nothing impossible for the Italians. Everything can be managed, the compromise can be always found. They are able to promise to be at two different places at the same time and then to manage it in a way that nobody can be really mad on them. They can perfectly customize the service according to the customer’s requirements. They are able to make friends with strangers in a very spontaneous way. At the beginning I was not especially fond of this characteristic. Anyway, I find myself quite often in a situation that I appreciate their “tuttosipuófare” (everything can be managed/fixed-up).

And what can the Italians learn from the Slovaks? To celebrate the wedding! To rock it with the music and dancing, with traditions and singing. The Italians reduce the wedding celebration to a (pssst! boring) festive dinner. It applies especially to Tuscany. I guess it is different in the South of Italy, near to Naples. Fortunately, we celebrated our wedding in Slovakia. It was an unforgettable experience for our Italian guests as well as all the other guests from abroad.

What are in your opinion the impacts of being raised in a multicultural family on your daughters?

My answer to this question I will begin with memories from my own childhood. I was 12 years old when I heard with my own ears a “real” foreign language for the first time. It was German spoken by distant relatives of my grandfather who came to visit our family. At that time I could hardly believe that they can really understand the sentences “Ich heisse Anna. Ich bin zwölf Jahre alt.” When I learnt them at school they seemed to be so foreign that it was incredible for me that they have some real meaning and there are people who could understand it. (Laughter). I perceived it as a test whether it really works with those foreign languages. And I would rather not mention the story of me seeing an Afro-American for the first time in my life. The fact is that I was really astonished when I met him at the high-school in Presov. (Laughter again). Nowadays my story reminds more of a granny story, doesn’t it? (Laughter). 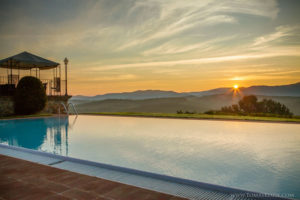 Our daughters are raised in a heterogeneous family environment of four different cultures – Stefano’s mother is Croatian, his sister-in-law half-Japanese. Apart from that they grow up near to great cities and coveted tourist destinations such as Florence or Siena. In the summer they have 3-months summer holiday. Two months they spend with us in our agriturismo. Here they have numerous opportunities to meet their peers from other countries so they have the possibility to learn the importance of speaking foreign languages. In the third month they stay with their grandparents in Slovakia. In this way they have many opportunities to create a close relationship with different nationalities, a unique chance to learn how to interpret the diversity of cultures, traditions, food and history.

I am sure that growing up bilingual is a great advantage for them. I assume they already understand it themselves. Their knowledge of Slovak language opens door to understanding also other Slavic languages. They are always so excited when they can understand the Poles, Czechs, Slovenes, Croatians and Serbians. I would therefore never underestimate the Slovak language. On the other hand, sometimes I think that it is no big deal that they are bilingual. More than a half of my peers from the village I come from were bilingual and we never considered it to be something extraordinary.

Are there occurrences that someone still treats you as an alien? What are your experiences with the attitude of Italians to the immigrants?

Such thing happened only once to me. Since it was once only, I have already almost forgotten it. When it happened I could already understand the spoken and written Italian on a quite solid level. I raised a claim regarding my mobile phone. My contract was in contradiction with what was declared by the seller during our conversation. Of course he tried to interpret the situation in a way that as a foreigner I was not able to understand what he said. He did not succeed. 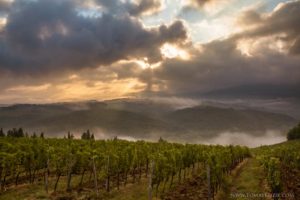 Apart from this exceptional occurrence it never happened to me that I would be discriminated because of my “non-Italian” origin. On the contrary, from the first day I was here showed the Italians in relation to me interest, admiration and were very accommodating. Especially when I was pregnant and when they met me with a newborn child they never missed a chance to make a compliment and to ask about my country and family. With one of the mothers we even agreed on barter language lessons. I taught her German and she taught me Italian. During our lessons she anyway kept asking about Slovakia.

When my daughters were in kindergarten the teachers invited me to hold a lecture as part of their intercultural program. Now at school my daughters are often asked to talk about Slovakia to their classmates and even to teach them some Slovak words.

Also my philosophy professor who is actually my peer (I have started to study philosophy in Florence as 31-year-old) with interest listens to the stories from my childhood in a communistic country.

I have to say though, that I also made an effort in terms of my integration. I strived to learn the language as soon as possible and to take it to an appropriate level. I spent most of my time with the locals and invested a lot of energy in building relationships. I taught my daughters self-confidence. I taught them that they are “interesting” also for their peers, that there is no reason to be ashamed because of the origin of their mum. I taught them to perceive their bilingualism as a great advantage (it was not so automatic for them at all).

Of course, my story has nothing to do with the attitude of Italians to the actual situation of the immigrants or the immigration crisis impacting the whole Europe. In this relation there are many contradictory opinions present in the society. It is a mixture of concerns, dissatisfaction, maybe even defenselessness against the political (in)activity, but also of faith in goodness and in man, of aspiration to accept and to provide help. I guess it is similar in every country at the moment.

After the twelve years in Italy, is there still something you miss so much that you would like to bring it here?

If we talked about someone I would bring my whole Slovak family here. Since we talk about something, I guess it would be bread and salt – or rather the salted bread? (Laughter). 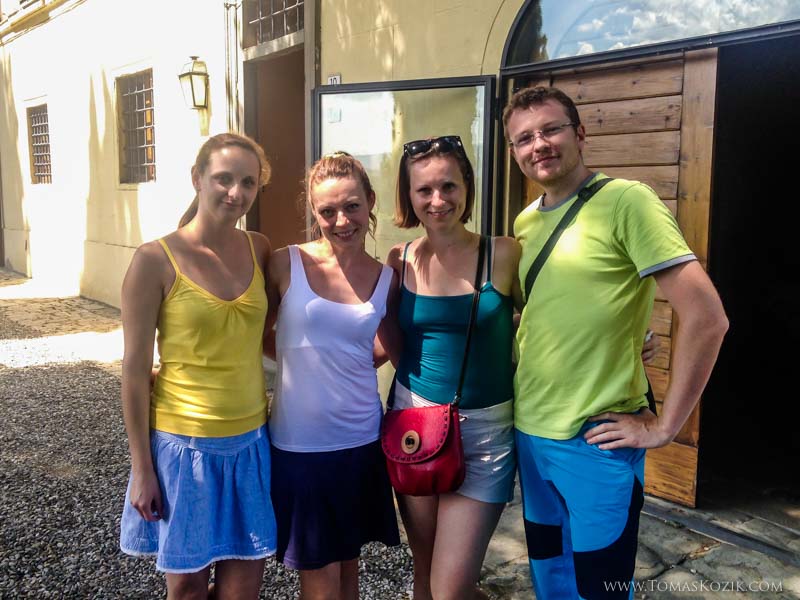