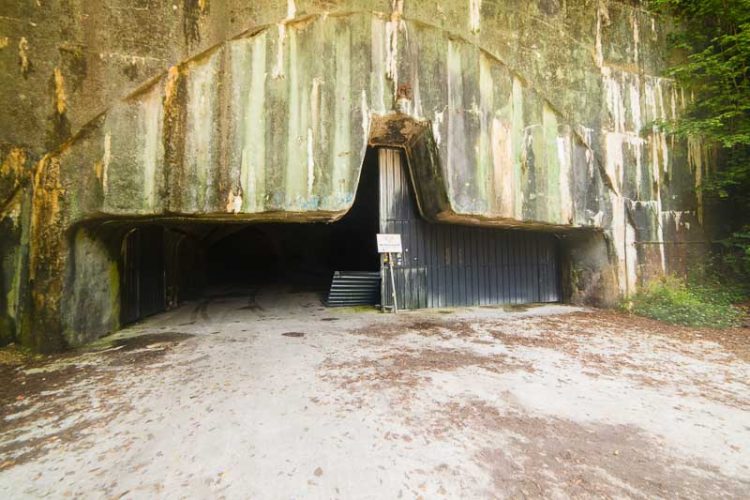 Located on the border between Bosnia and Hercegovina and Croatia, just a couple of kilometres away from the Bosnian town Bihać, there is a damaged military air base Željava. Why is it such a popular destination even among those who are not really interested in military history or military engineering? Because it is a place with a unique and a bit scary atmosphere. It is a piece of history, that is not a tragedy reminder and that can be explored with no restrictions or interdictions. The more information you have about this place, the more excited the visit is.

An airport hidden in a hill

The most convenient way to get here is to enter the place from the Croatian side. You pass the village Željava and take a narrow road to the runways which are still in a quite good condition. Anyway, it is quite obvious that the mother nature takes already her share. Each of the two still existing runways is more than 2 kilometres long. In 2019, when we had visited the abandoned air base, they still were in a solid condition and literally attracted to various motor adventures.

One of them leads to two out of four tunnel entrances. The tunnels had been caved in the hill known as Plješevica. One of those entrances has a unique shape copying the silhouette of MiG 21 fighter plane. As soon as you approach it, you feel the cold and wet breeze coming out of it. Although the air temperature outside the tunnel was 34°C, in front of the tunnel entrance we were freezing.

When proceeding deeper into the tunnel, an impenetrable darkness surrounded us just after a couple of meters. It has no sense, to go into the tunnel without a proper equipment. Do not be stingy on luxes.

Anyway, before we move forward, let’s learn more about these tunnels, about the reason why they existed as well as about the purpose they had.

No space for coincidences

Marshal Tito who ruled in the former Yugoslavia from the end of the WWII until the end of the 70’s with a firm hand was a farsighted leader. He made sure that even in case the events of WWII would repeat, he would be well prepared. He invested billions of dollars in building a network of secret bunkers in order to protect dozens of members of the elite. However, he was a soldier on the first place and so he also built an air base and a submarine port able to withstand the enemy attacks including the atomic ones. In Željava, we are standing in front of an air base that was supposed to bear a 20kt atomic bomb attack, that is an equivalent of bomb thrown on Nagasaki.

The tunnels caved in the rock should be 3,5km long. They could accommodate 4 squadrons (i.e. 48 to 96 fighter planes) and 1500 men. Some sources state that there was a hall in which a thousand men could have had lunch at the same time. There were also other objects necessary for support and running the military air base hermetically sealed and separated from the rest of the world. How long it took Tito to build this air base is not clear. Some sources state that the works had been started in 1948, some state in the 50’s. It is anyway clear that the air base was finished in 1968. KLEK or Objekt 505, as the air base in Željava is called in some documents, had been operated until the beginning of the 90’s.

In 1991, the air forces of the Yugoslav People’s Army abandoned the airbase. Before leaving, they blew up the runways. After that, the air base got under control of the armed forces of the self-appointed Republika Srpska. As soon as in 1992, they also had to abandon it. To make sure that no one else can use the air base anymore, they damaged the tunnels with detonations. The locals state that the smoke from the massive fires kept going out of the tunnels for more than six months.

Inside the tunnels, there is the darkest darkness I have ever seen. The high-performance spotlights can cut it just for a couple of meters. After that their light gets eaten by the impenetrable darkness. While the entrance to the tunnel is protected just by a simple sheet-metal door, a couple of meters deeper in the tunnel you can find a massive gate build of reinforced concrete. This could in case of emergency separate the tunnels from the rest of the world hermetically. It was only partially damaged by the detonation and today the pieces of metal screwed and sticking into space remind of a creature with a ripped abdomen and rolled guts.

In the darkness, the silhouettes of rooms are to recognize which used to have different purposes. Debris and other rest-overs of the detonation are all over the place.

If you want to explore the tunnels of this underground air base in a more detailed way do it with an experienced guide.

Beware of the mines!

What you should be especially aware of on the territory of the abandoned air base are the mines. Although part of the mine fields have been already cleaned with the financial support of EU, for a regular visitor it is not clear what has been left and where exactly. The respective signs warn you of the danger. We recommend to respect them.

Related Articles
3 tips on what to see in Jajce
Bunker of Marshal Tito
3 years, 10 months, 3 weeks and 3 days: Sarajevo – life in the siege