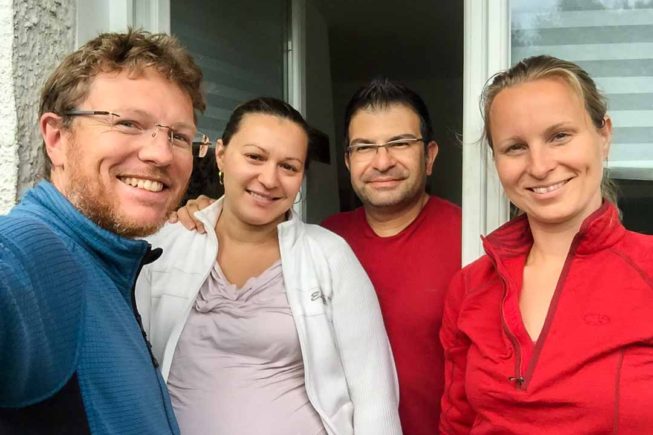 On our way through Bretagne we met a young and energetic Slovak woman Ludmila. For her France by far is not the first foreign country she has ever lived in. Before moving to France she lived in the Great Britain and in Belgium for a couple of years. During our conversation she not only told us how she has become an im-/emigrant and why she keeps living abroad. She as well shared with us how the situation in Slovakia looks like from abroad.

Vista Travellers: How long have you been living outside Slovakia?

Ludmila: For about 8 years.

Vista Travellers: How did you get abroad? What was the reason for moving outside Slovakia and for the decision to stay abroad?

Ludmila: There were personal reasons behind this decision. Because of a bad relationship and complicated breakup I had to get “somewhere really far away”. Since I could not find good opportunities in the country’s capital Bratislava, I decided to take the au-pair job in the UK. As for the question whether to stay abroad or go back to Slovakia, in fact, I have not had the opportunity to think about it yet. With my husband we have not settled down yet. Time will show where we end up.

Vista Travellers: In which countries have you been living and working?

Ludmila: In Slovakia of course (laugh). I also worked and lived in the Czech Republic, in the UK, in Belgium and currently I am located in France.

Vista Travellers: Which of these countries did you like most and why?

Ludmila: To be honest, my decision where to move next was always based on the unavoidable initial investment. This was different to a tourist who analysis and counts what and for how much can he in the particular country experience or see. And so I ended up in the Czech Republic and in the Great Britain especially because of the fact that the job interview could be performed via phone or email.
In the Great Britain I absolutely liked the possibility to simultaneously work and study. The employers there enable their employees to take part in the courses also during the working hours. Thanks to this fact I was able to gain certificates in the English and French language, two diplomas from a private institute as well as to take part in an evening course.
I appreciated on the Brits that they were so friendly to the immigrants. There is almost each nation and culture represented in the Great Britain and this colorful mix keeps the local economy in a very good condition.

Vista Travellers: Do you actively follow the actual situation in Slovakia? If so, what do you think of the current development?

Ludmila: I do and I always did. When looking on the political scene it is clear to me that the new political parties and their members are no politicians but public figures – coming either from the show business or from the entrepreneurial sphere. They only changed their place of work. Slovakia is short of political parties whose members would have been born with politics “in their blood”. Generally, I consider as the biggest shame of Slovakia and Slovaks success of the Kotleba’s political party in the recent parliament elections (Marian Kotleba is a leader of far-right political party promoting ideas such as Slovakia’s EU and NATO exit, they are openly against Roma people, Slovak National Uprising, NATO, the United States, the EU). In my view, there cannot be anything worse than to try to solve existing problems through extremism.
As for the “traditional” problems of Slovakia such as inadequate salaries of teachers, nurses, low pensions, I am sure that each country is facing the same problems. As an economist I think that the biggest problem in these sectors is the absolute control of the state. We should have more private schools, private insurance companies, private hospitals and clinics that would compete with those owned and governed by the state. The competition would increase investments in the latter mentioned and people would have the possibility to choose whose service they use. For example, where they get the medical or pension insurance. As a rule of thumb, more competition brings more benefits for ordinary people. Competition pushes the quality upwards and the prices of products and services downwards.

Vista Travellers: From your point of view is there any difference between how the refugees and the so called immigration crises is perceived in Belgium or France and in Slovakia? If so what is in your view the cause?

Ludmila: The difference definitely exists and is quite obvious. People and countries in the West are used to immigration for decades. The original locals got “mixed” with numerous other nations, other religions. In the western EU countries is the term “immigration crises” usually interpreted as follows: According to the EU rules each refugee stays in a country which he or she enters as first. It is however impossible for Greece and Italy to take care of the thousands of refugees entering these countries using exclusively their own resources. They therefore request that we share not only the good things as a union, but the bad things as well. Practically speaking they request to share the costs of care of the refugees in a fair way. I personally absolutely agree with such approach.
It makes me sad how this situation is interpreted by the local politicians in the Slovak media. The refugees did not fleet calm and peaceful countries in order to sponge on the social systems of our countries as the Slovak politicians very often like to promote it in media. At the beginning of 2016 a refugee camp was established literally a couple of steps away from our place in Brussels. I used to walk daily underneath their windows on my way to the nearest subway station. There was nothing extraordinary in the situation around the camp. The atmosphere there was peaceful. And then I learnt that a refugee camp in Slovakia was patrolled by children. And their parents approved it. Why do they need to patrol the camp? And why are they not in school? All of a sudden people suffer under a paranoia which I cannot understand. They publicly attack innocent people – pregnant women or those covering their heads with headscarf. They obviously have forgotten that not such a long time ago it was also in Slovakia common for a married woman to cover her head with a headscarf. People in Slovakia automatically associate the terrorist attacks with the refugees. But in the western countries a completely different problem is highlighted in this relation. Mostly local people stand behind these attacks. They are long-term unemployed, had previously problems with the law etc. It is therefore necessary to look for solutions for the antisocial individuals and not for refugees. It is necessary to prepare integration programs for these people. It is necessary to support them in further education since most of them do not even have finished the secondary school (which reminds me of the problems with the Roma minority in Slovakia).
Unfortunately, I often notice that the news adopted by the Slovak media from foreign news agencies are translated incorrectly or interpreted in a misleading way. There were some cases when the Slovak media informed on the same occasion in a completely different way in comparison to CNN or BBC. And there are many examples of news that never reached the Slovak audience and so people do not have a chance to create a full picture of the reality, to know the “whole truth”.

Vista Travellers: You married a Muslim coming from Turkey. What was the reaction of your family and friends in Slovakia? Did they not try to warn you, to change your mind on that marriage?

Ludmila: No, I have never experienced such reactions. While studying at the university my father used to have many fellow students coming from different countries. And my mother works outside Slovakia. They both share the opinion that irrelevant our nationality first of all we all are people. Therefore I never experienced any concerns, fears or paranoia from their side. After my family got to know my husband they all like him a lot.

Vista Travellers: What was the point in your relationship where you felt most the fact that you are coming from different cultures? How did you manage to overcome these differences?

Ludmila: I would correct a little your formulation. I would simply skip all the “different cultures” and “cultural differences”. We have noticed nothing similar in our relationship. I started to date with my husband because I found him sympathetic. He won my attention and my love through a romantic approach in dating what is quite rare nowadays. After ten months I said my “I do” to a man who never would hurt me in any way. I have his full respect as a wife and as a partner. We take decisions together. For six years already he has been telling me every single morning “Good morning, my love”. He is thankful for the laundry been done, for the food been prepared. He brings me flowers without any special reason. He even allows me to drive “his” car (smile) anytime I want – even without asking him (laugh). He prefers to come home after the work instead of having a drink or two with his friends. I am sure that many women would appreciate having such a husband. By the way, my ex-boyfriend who was born in Slovakia and raised in a Christian family never did anything of this. It was quite in opposite. He was able to pour all the wrath of the whole world on me – anytime and in any way. To sum it up, there are not and there ever have not been any intercultural differences between me and my husband. It is actually very simple: his parents raised him as a polite man. That’s it.

Vista Travellers: What is your recipe for harmonic co-existence of different cultures, nationalities and religions?

Ludmila: There is no recipe (smile). There are only two types of people in this world: the good ones and the bad ones. Who wants to act finds a way. Who does not want to act finds a reason. A good example is the situation police vs. Afro-Americans in the USA and in London. There simply is no such problem in London, they have in the USA.

Vista Travellers: If you had the possibility to bring three things or characteristics from the countries you have lived in to Slovakia, which would it be?

Ludmila: The cultural diversity. Everyone contributes to the same target in a different way. People learn one from each other. At the end of the day the whole community is much more “colorful” which is great.
Customer approach. To be more open, nice to people and to customers instead of approaching them like a Japanese programmed robot.
Family cohesion. Family as a society unit is very important. Unfortunately, it is also very neglected nowadays. It is sad to see how everyone is living on their own and according to their individual expectations. Members of the families do not visit each other anymore, they do not spend time together, they do not help each other.

Vista Travellers: What from Slovakia would you most like to have where you live now?

Ludmila: Definitely the whole family (smile). I think that everyone who lives far away from his or her home would agree on one thing – they do not miss anything as much as their families. Even despite the regular and frequent visits it does not feel right and Skype is of any help. My husband and I therefore wish that we could move somewhere closer to our families.