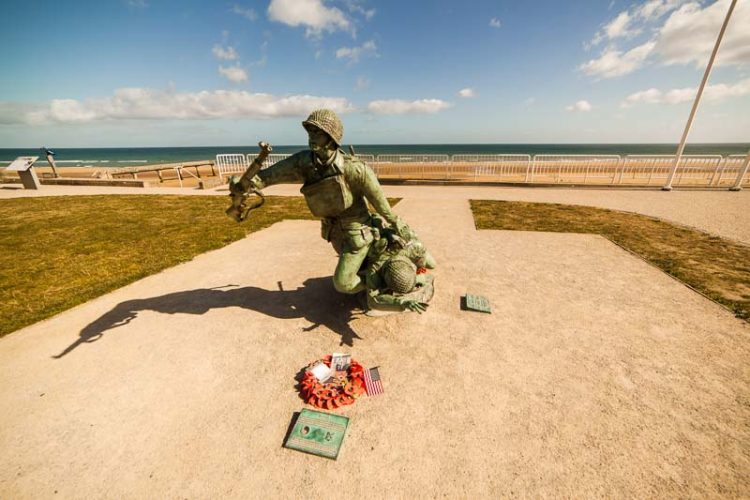 We entered France through Normandy. There we made a couple of stops. From all those places we visited three will forever stay in our memory. We write this blog in order to explain why and share the experience with you. Since one article is too little space for describing all three, we have decided to make an article series. In this article we are going to share with you why we will never forget the D-Day beaches.

Normandy can be proud of dozens of kilometres of sandy beaches. Many people spend a beautiful summer vacation on them although these beaches are located quite northerly. Even when we arrived in the mid-September, there were still many vacationists. For a while, we even considered to join them.

There is no such a sand…

What numbers of vacationists consider today a nice summer destination used to be a nightmare for dozens of thousands of soldiers some decades ago. Their goal was to launch an invasion by a disembarkment at the Normandy coast. When we visited these locations personally, it gave us the creeps. Wide sandy beaches stretched dozens of kilometres along the coast bordered with steep rocky reefs. From the top of the reefs you can see to the distance in each direction. If we had been Germans at that time there would have been no argument convincing us that anybody would be insane enough to start the invasion right here.

Omaha Beach. A place where the Allies Armies suffered the biggest losses on 6th June 1944, on the D-Day. Looking from the top of the reef at this extensive and open space covered with powdery gold sand we realize to the full extent how monstrous this plan was. Although nowadays we are quite grateful for its effectiveness. To the backbone we feel all the terror, anger, hopelessness, despair and anxiety the soldiers for sure felt as approaching the coastline. What could have been their thoughts shortly before the doors of their crafts opened? They must have known that this was the end. That there is no way back and the chance of this venture for a happy-end – their own personal happy-end – is very small. Were they willing to bring this sacrifice – that without a pathos could be called the highest sacrifice – when the result of the operation was more than unsure?

The anchor problem must be mastered!

That is a quote of Sir Winston Churchill and his indeed original contribution to a discussion about how to ensure the transfer of troops, machinery and supply to the European continent and how to open the western front. Although it may sound a bit arrogant, set in the context it actually makes perfect sense. Churchill tried to focus the attention of people on the result and to encourage them, so they do not get discouraged by the apparent obstacles. As the results showed, he was right!

We have a slow walk on the Gold Beach in Arromanches. Exactly here, as phantoms protrude from the waters of the Atlantic Ocean relics of the harbour known as Mulberry B. Although it should have been only a temporary solution until one of the big harbours nearby would be taken, at the end of the day Mulberry B had been used for more than 10 months. It enabled the Allies to transfer 2,5 millions of soldiers, 500 000 vehicles and 4 million tons of supplies to the European continent. This was enough to open the western front. It was enough to reverse the course of the events of the World War II.

You will not make any mistake if you skip the D-Day Museum. What we however recommend to visit is the Arromanches 360. It is located on the high cliff above the town. It is a 360° cinema in which you can learn almost everything about the 100-days long battle of Normandy. And maybe it will help you to imagine better what could have been the thoughts of soldiers navigating towards the Normandy coast.

Do the places also have a karma?

We have never tried to answer this question. Anyway, if they had, what karma would this piece of Normandy have? As soon as we overcame the frustrating experience of the military cemeteries sheltering the victims of bloody battles of WWI, we had to face next tragic historical events taking place on the European continent. On the top of a cliff above the Omaha beach where thousands of Allies‘ soldiers lost their mostly young lives there is a nice camping site. We spent a night there. Honestly, we were a bit scared what that night would be like. However, it was very peaceful, full of stars and sounds of waves crashing on the sandy beach. We sat quietly underneath the stars and our thoughts were with those who were never able to leave the Omaha beach.

Related Articles
3 years, 10 months, 3 weeks and 3 days: Sarajevo – life in the siege
Three places in Normandy we will remember forever 2/3
Our stops on the Transsiberian Railway