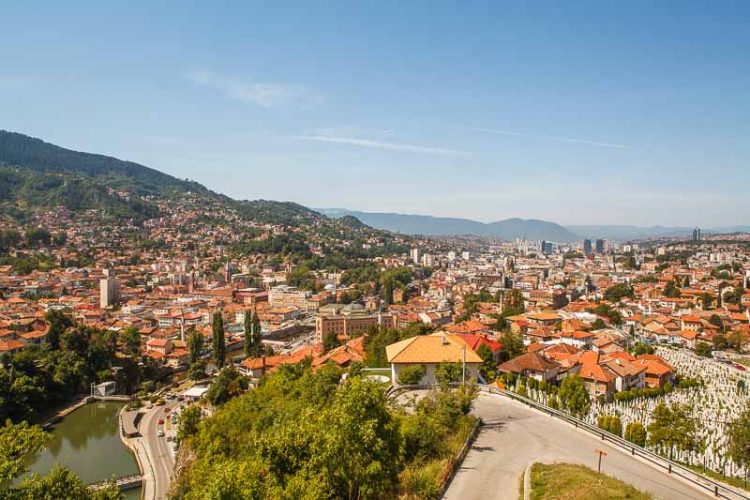 You have just returned back home. You are consumed with the thoughts about the future. Things are not going well in your country. People in your city are nervous. There was a conflict today on the Vrbanja bridge. A peaceful demonstration of students who protested against the war was suppressed by the troops of the Yugoslav People’s Army. There are rumours that the suppression was harsh and with casualties. You cannot wait to turn on the TV in order to watch the evening news. Maybe, they will disprove the rumours. But pushing the switch does not have any effect. The same result with the light switch. You get it finally. There is no electricity. You try to calm yourself: Hopefully, it is just a temporary blackout. You will have to wait a while for the official news. You want to use the time you suddenly gained for washing the dishes. They have been resting in the kitchen sink the whole day. You turn the tap. Surprisingly, the water does not flow calmly, as usually. Instead, it splashes for a short while and finally it is followed by a couple of loud air explosions coming out of the pipe. After that there is a complete silence. You already swear within yourself. So, you at least will eat your dinner. You planned to heat the soup you had yesterday. Unfortunately, there is no gas going out of your gas-cooker. The gas delivery has been shut down as well.

Maybe, this was someone’s true story of how the longest siege of a city in the modern history began. The Serbs, at that time still in the uniforms of the Yugoslav People’s Army laid siege to Sarajevo and basically sealed off the city for exactly 1425 following days. At that time, the capital of Bosnia and Hercegovina counted about half a million of inhabitants. The enemy had cut off the deliveries of electricity, water as well as gas. The surrounding hills were taken by the military vehicles and tanks. The terrain around the city was soon mined, so that there was no possibility how to break loose from the city under siege. Oh, and maybe you want to know whether there really were some casualties during that demonstration on the Vrbanja bridge. Unfortunately, yes. Two female students, a Bosniak Suada Dilberović and a Croat Olga Sucić. They are considered to be the first victims of the war in Bosnia and Hercegovina and so the bridge, on which they were killed, nowadays carries their names.

The Serbs shelled the city on daily basis. They hoped to force the inhabitants to surrender. The UNPROFOR troops that took control over the local airport about two months after the siege had begun made a detailed evidence of the number of shells thrown on the city every day. In average, the city was a target to 330 shells daily. On 22nd July 1993 however, the Serbs shoot 3777 shells in the direction of Sarajevo.

Such a shower could not remain without consequences and casualties. During the siege 11 541 people were killed out of which 1601 were children and teenagers.

The shells left the face of the city full of scarves. The traces in concrete and tarmac markedly remain of the rose flowers. And so, after the end of the siege the local artists filled the traces with red rubber and they called them Sarajevo roses. These roses have become a symbol and a memorial of all the siege victims. Their red colour should remain us of the shed blood of the Sarajevo inhabitants who got killed while they were queuing for bread and water, of children who played in the streets of the besieged city. As well as of all those who simply tried to survive in a city from which there was no escape.

Should we protect it just with our own bodies?

At that time, there was almost nobody to defend or to protect the city and the inhabitants. Just a couple of weeks prior to the beginning of the siege there was a referendum in the country. 60% of the inhabitants attended it, out of which 99% voted for independency of Bosnia and Hercegovina. The Serbs living in the country, who boycotted the referendum did not like this scenario, since they wanted to keep Yugoslavia united and under the governance of Serbia. There was no chance to form any military troops in Bosnia and Hercegovina after the independence declaration. And so it happened that the only defenders of the city were the former members of the Yugoslav People’s Army and of the local police. However, they lacked proper stand of arms. Mostly, they had only some handguns and hunter’s rifles. To break a blockade with such equipment was impossible.

When a tunnel is your last hope

There was only one hope for the besieged city: a tunnel. And that is also how it was called. The Tunnel of Hope. A military engineer Nedžad Branković projected it. The construction started on 1st March 1993 and was performed nonstop in three 8-hour shifts. The tunnel was longer than 800 meters and lead underneath the runway of the local airport to the besieged city. There were two brigades going towards each other.

Although they lacked the proper tools, they were able to meet in the middle whereas they did not miss the meeting point but a couple of centimetres. It took the brigades 3 months to finish the tunnel. The salary the workers received was one package of cigarettes a day. At that time, cigarettes had become a universal means of payment. The tunnel started its operation on 1st July 1993. It was 1m wide and 1,6m high. Although so tight, it was able to supply the army as well as the inhabitants in the besieged city and to evacuate the sick and the wounded. After the first tunnel was finished, the brigades started to build another one with a much bigger capacity. However, it was finished only shortly before the siege was lifted and so they have never used it.

The most fascinating fact about this tunnel is that the Serbs who besieged the city, never found out, where the tunnel was located. They knew it existed, they however had no idea where exactly.

To get from the city to the tunnel, then to replenish stock on the territory under control of Bosnian troops and to get back to the city was not only time consuming but it also meant to risk one’s life. The distance, that could be today covered within 30-40 minutes by car, took more than 3 days during the siege. People had to walk and they had to get through the death zone. The death zone was the Bulevar Meše Selimovća. It was a wide boulevard with the tram rails in the middle and high buildings alongside. Those were occupied by the Serbian snipers who killed each pedestrian who had not been careful enough.

How did they stay sane?

If your thoughts are occupied by the simple question: How could anybody survive 4 years in this city? There are a couple of explanations you might find satisfying. The locals did not surrender. They did not give up. Quite in opposite. They tried to keep the everyday life as similar to the time before the siege as possible. Of course, no one went to work during the blockade. Except some teachers. Some of the schools in the city kept working. The aim was to keep the heads of children occupied, so they at least for a while forget what was going on out on the streets. The teachers worked for free. Although only in a restricted regime, some of the TV contents also kept being produced during the blockade. The TV building is definitely one of the ugliest in the whole country. Paradoxically, its thick concrete walls enabled the TV professionals to create the popular comedy show. And so it happened, that this ugly building is one of the most favourite among the inhabitants of Sarajevo. It has become a symbol of the will to live, of the will to live normally in the abnormal circumstances. Also, the journalists kept working.

And as the time went by, people tried more to focus on activities reminding them of the peaceful time. They organized a beauty competition, a fashion show for the UNPROFOR members, they went to discotheques, to cinema, to theatre. One of the most popular pictures depicting the resistance of ordinary inhabitants of Sarajevo is the photo of Tom Soddard displaying Meliha Varešanović. She is also known as Sofia Loren of Sarajevo and Tom Soddard took picture of her when she dressed up and wearing her most beautiful jewellery proudly walked on the street lined with sand bags and soldiers.

Finally, even concerts of international stars took place in the besieged Sarajevo. The most publicized was the concert of Iron Maiden frontman Bruce Dickinson who arrived to Sarajevo with his band Skunkworks. Risking their own lives they got smuggled into the besieged city in order to play for its inhabitants and to bring them an evanescent feeling of freedom and peace.

It has been already 25 years from the end of the war. From the most efficient economy of the Eastern Blok there has been left nothing after the war. Everything, what they succeeded to build during the decades after the WWII was destroyed by the 80’s crisis and the 90’s war. People and countries start from the scratch. And even 25 years later it is obvious that they still have a long way to go. Even if there was anything left after the war, it got destroyed during the economy transition. Like other post-communistic countries, also Bosnia and Hercegovina face problems with high unemployment rates, highly educated professionals leaving the country to start their lives abroad, lack of investments to boost the economy, corruption.

Has it really nothing to do with us?

For me personally, the war in Bosnia and Hercegovina is a memento and a warning at once. It is a lively evidence of how dangerous the nationalism can be and how devastating the intolerance which artificially injects the nationalism among people. I wish we do not repeat past mistakes and mistakes of the others. In opposite. Let’s learn the lesson. Don’t listen to those who try to persuade us that our nationality has right to something more than the others or that we have the right to act to the detriment of someone else. Tolerance, mutual understanding and cooperation are our future. A war never brought anything good and never had any good consequences. And it never will.