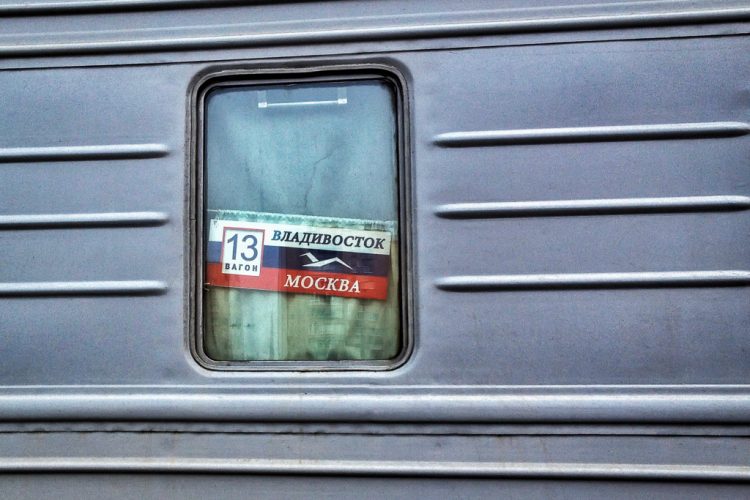 Kazan – the first stop of our Transsiberian railway trip. Kazan made a very good impression from the very first moment. Afterwards we got out of the train, we found ourselves on a modern railway station. We believed it made a better impression than the Vienna International Airport. 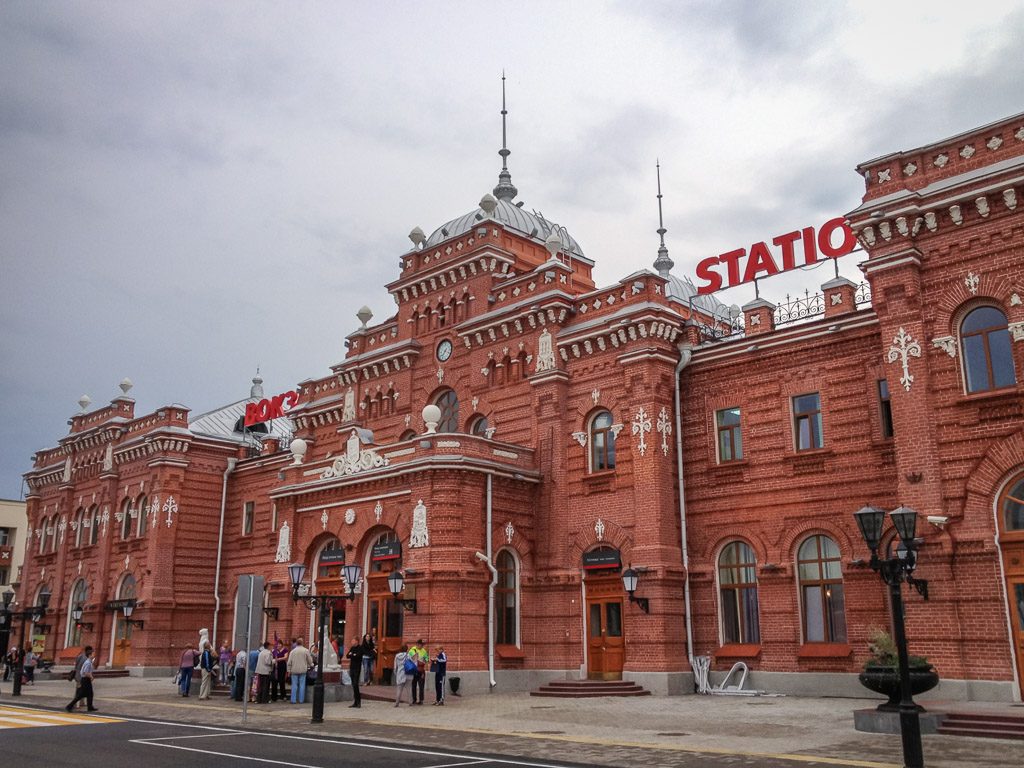 Our hotel, although a bit hidden and distant, surprised us in a positive way as well. Clean, neat, modern and the price was extremely advantageous in comparison to Europe. The good image of Kazan was a bit destroyed by the local taxi drivers. Either they demanded an inappropriate sum for a ride. Or they failed in finding the place we should have been picked up from. 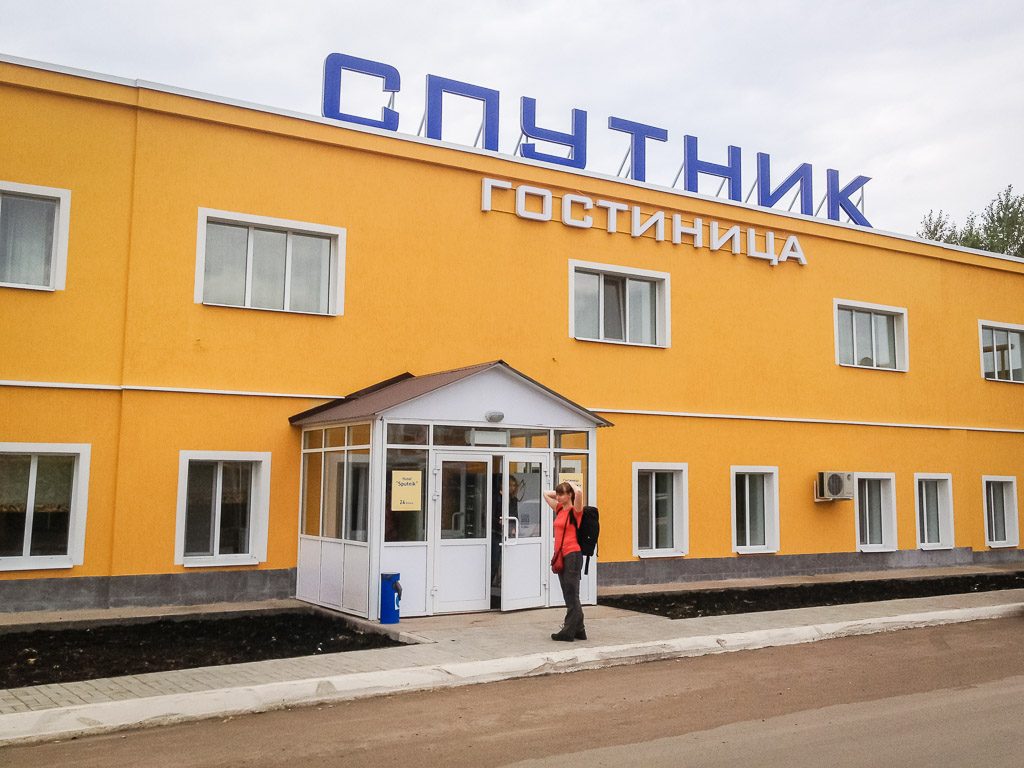 We liked a lot the historical city centre. We liked its beautiful architecture. And we liked even more the harmonic co-existence of Christians and Muslims that is here being taken for granted. On the area of Kazan Kremlin, you can find a church and a mosque next to each other. By the way, this mosque is the central mosque of the Russian Muslims. It is the most recent and the biggest mosque in Russia and it is called Kul Sharif. 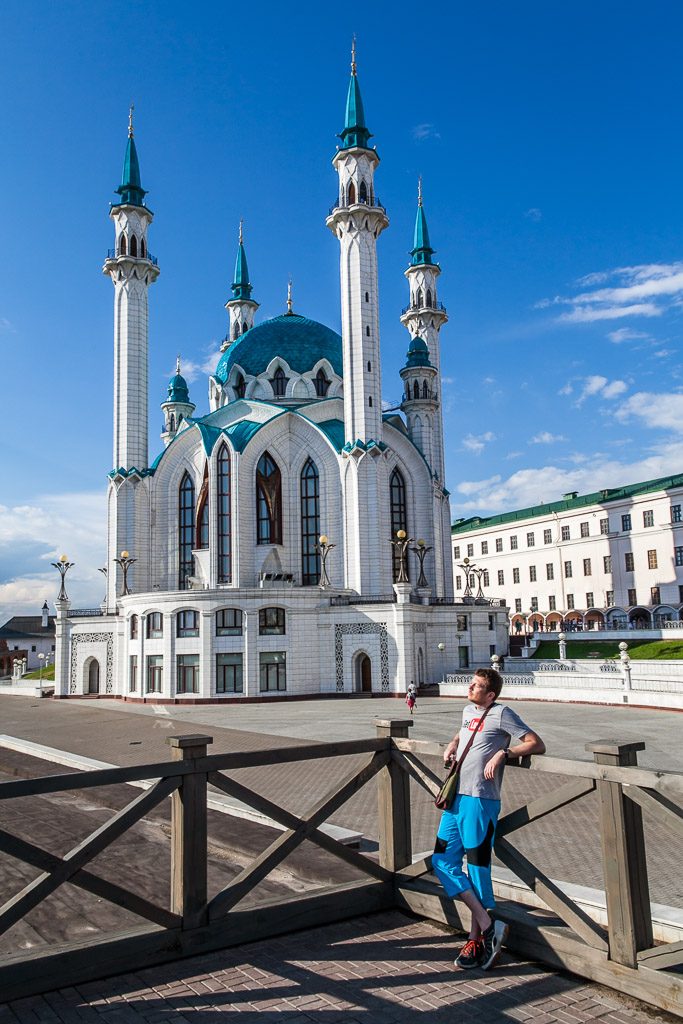 Just a couple of steps away from the mosque the “leaning tower” can be found. It remembers times of the height of the Khanate of Kazan and it was named after the beloved wife of its last sovereign – Söyembikä. 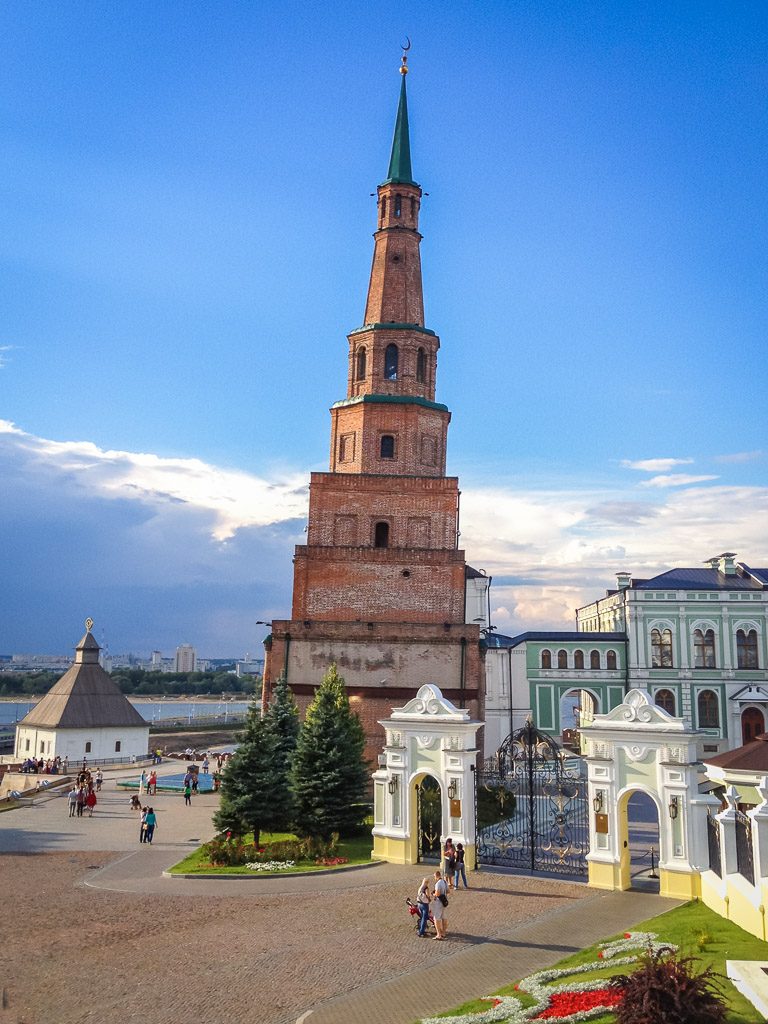 From the walls of Kazan Kremlin you can observe the modern part of the city centre.

Starting by the Kazan Kremlin there are two main streets leading to the city centre. The Bauman Street and the Kremlin Street. 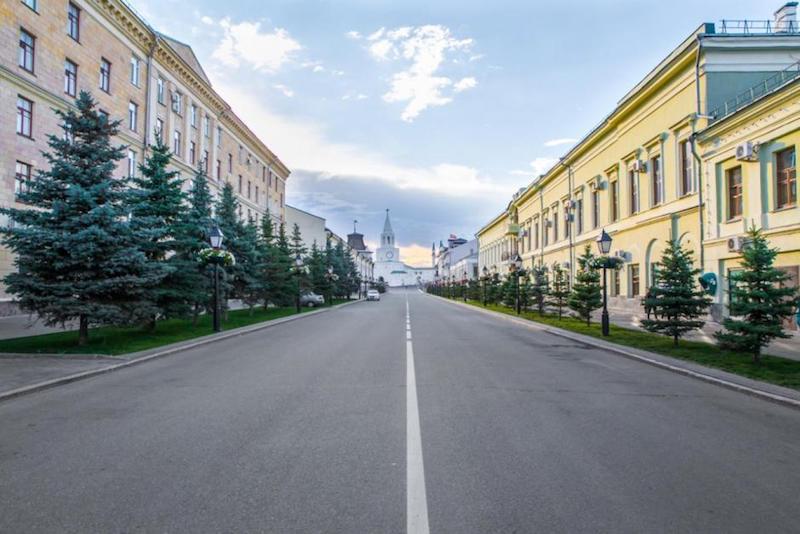 Everywhere we found the traces of the Universiade that took place shortly before our arrival. They were represented in the reconstruction of the historical buildings. These however were empty and their reconstructed premises just waited for being meaningfully used. The atmosphere of the Bauman Street reminded us of the Moscow Old Arbat Street. Many shops with Russian souvenirs, restaurants, public canteens as well as fast foods, street artists, singers, dancers. Tradition mixed up with the modernity, typically Russian with new western trends. 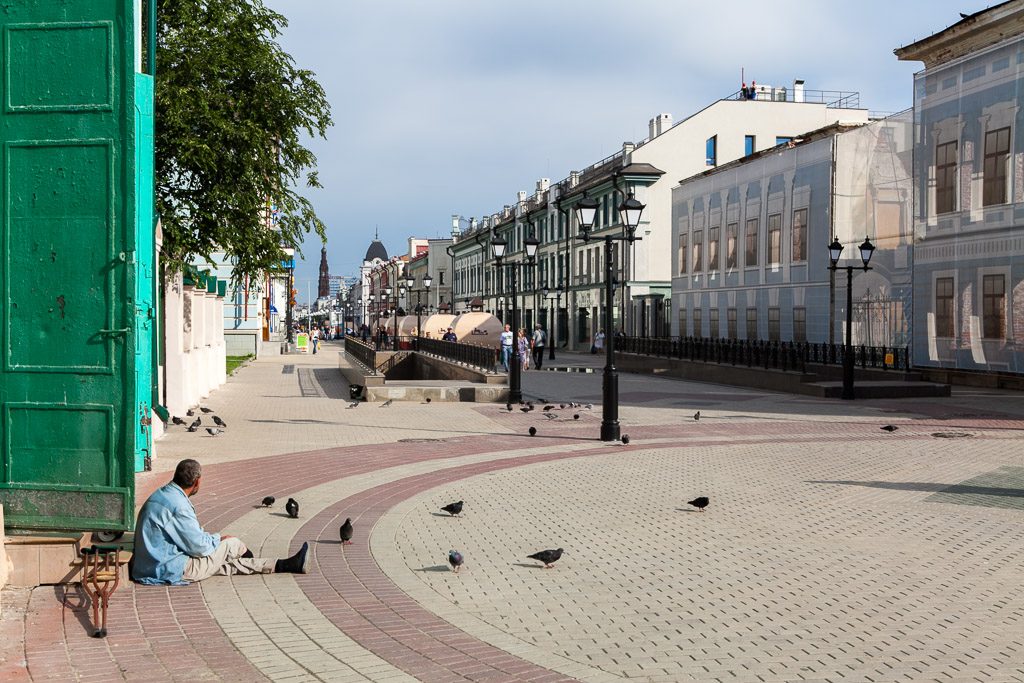 Our paperback guide described Kazan as one of the most tasty cities of Russia. However, the reality did not meet our expectations. All our attempts to taste the local and traditional cuisine failed. We hoped to find a hidden café with the domestic cuisine. Unfortunately, we were not lucky enough. And so, the best offer we found in Kazan was the restaurant Старый Амбар – an ordinary commercial restaurant – and a public canteen in one of the local shopping centres. In the canteen we got a traditional food, although heated in the microwave oven. Anyway, it was much better than any lunch menu offered in Bratislava’s restaurants.

This monastery located about 50km off Kazan is the final destination of many pilgrims – members of the Orthodox church. The reason is the miracle icon of the Georgian God’s Mother. It is a beautiful and interesting place. Interesting in many ways. For example, during our presence on the territory of monastery we had the opportunity to observe various marketing and business activities run by the local monks. It was e.g. a ban on own candles. The visitors were obliged to buy candles inside the monastery in a special shop. Or a demonstration of monks choir singing that should motivate the visitors to buy their CD – right in the church. As we witnessed, also the group guidance on the territory of the monastery is being paid. Peculiar was especially the way how the payment was performed. Leader of the group of visitors used a moment when the attention of the group was focused on the monks choir to slip a couple of banknotes into the pocket of the monk who guided them. 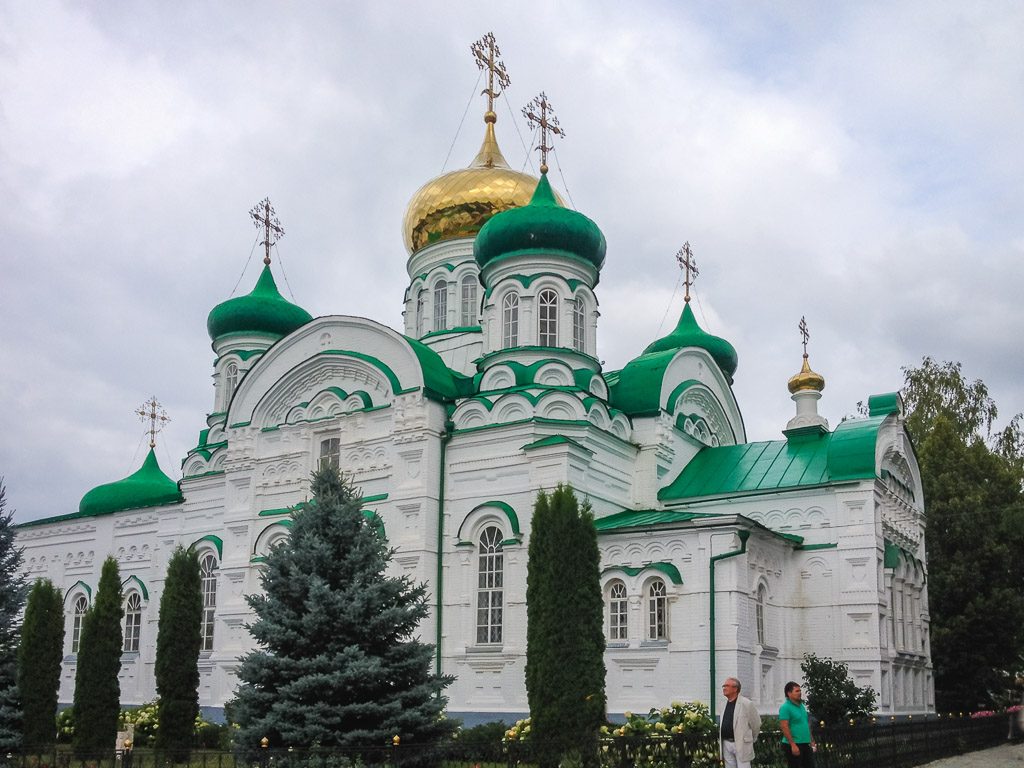 Anyway, we found most funny the ceremony of consecration of a car. It is said that is still very popular in Russia these days to have your car consecrated. How it works? You buy a car, you pay the priest a round sum and the priest consecrates your car and in addition says a prayer for you as well as for your car so that the Lord leads you only on the ways where nothing can happen to harm you. And so the question is – why to pay a lot of money for insurance when you can buy the highest protection at the pop? 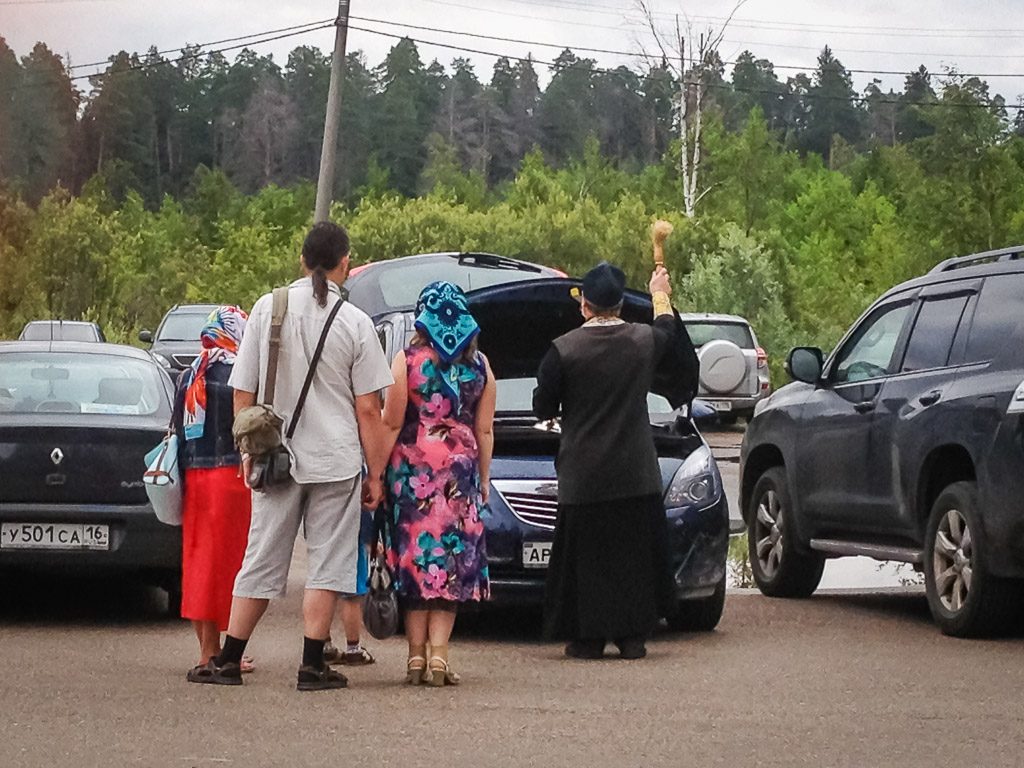 Many do it this way. During our visit in the monastery we saw numerous consecrations. It is not that complicated to sum up, how profitable this business is. It is anyway hard to say how this money is being used afterwards. We want to believe they are spent on orphans and people in need.

One of the consequences of the car consecration is that the Russian drivers feel untouchable. We were more than sure that the taxi driver who took us to the Raifa Monastery drove a consecrated car as well. Remember the YouTube videos showing insane situations on Russian roads? Well, it is for real. Trust us.

When talking about means of transport in Russia we cannot omit the bus transportation. After visiting the protected area located near the Raifa Monastery our intention was to get back to Kazan by bus. Since there was no schedule available on the bus stop we had to rely on the information provided by the locals. The bus was supposed to depart at 15:30. But it did not. Soon a girl joined us in waiting for the bus. She had the information that the bus was supposed to depart at 16:00. She anyway got bored by the waiting soon. She stopped a car passing by and left. After a short time another fellow-passenger appeared at the bus stop. He stated that the bus was supposed to depart at 16:15 for sure. Unfortunately, he was wrong as well. Finally, the bus arrived at 16:30. Nobody thought of complaining though. Everybody was happy to finally move in direction Kazan. 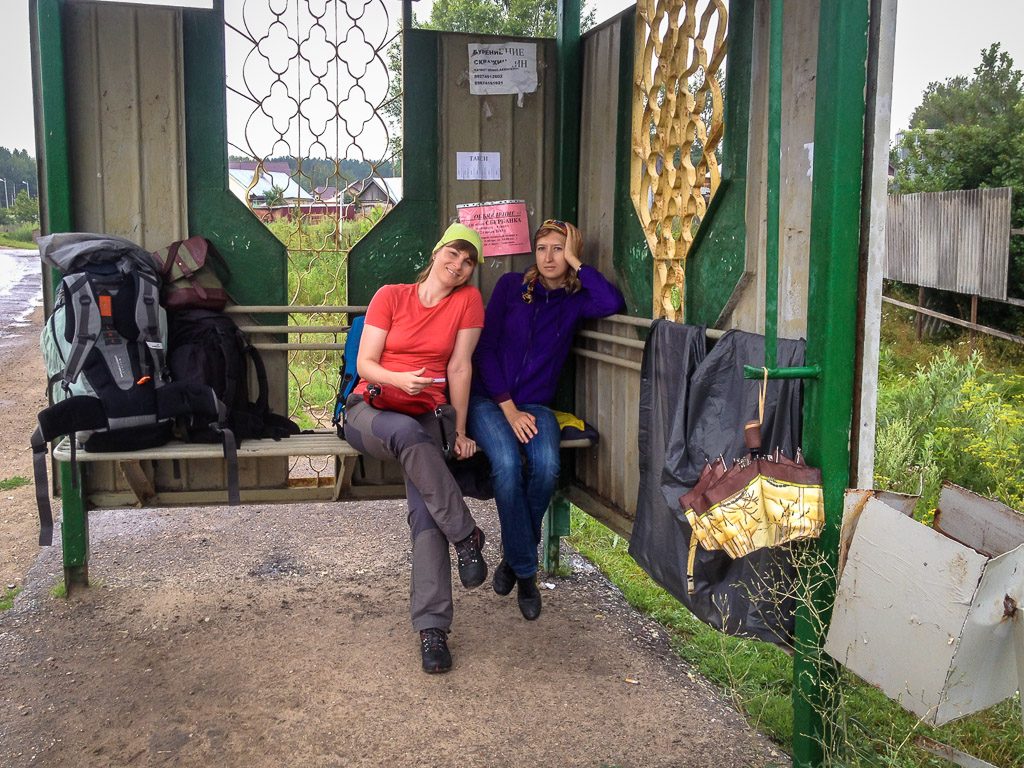 Just 20 hours on train to the East from Kazan and we arrived to Tyumen, one of the oldest Siberian cities. We especially got intrigued by the architecture in this city. On the two most important streets of Tyumen – the Lenin Street and the Street of Republic – the least interesting buildings coming from the period of the oil boom stand next to the beautiful and unique villas from 19thcentury. 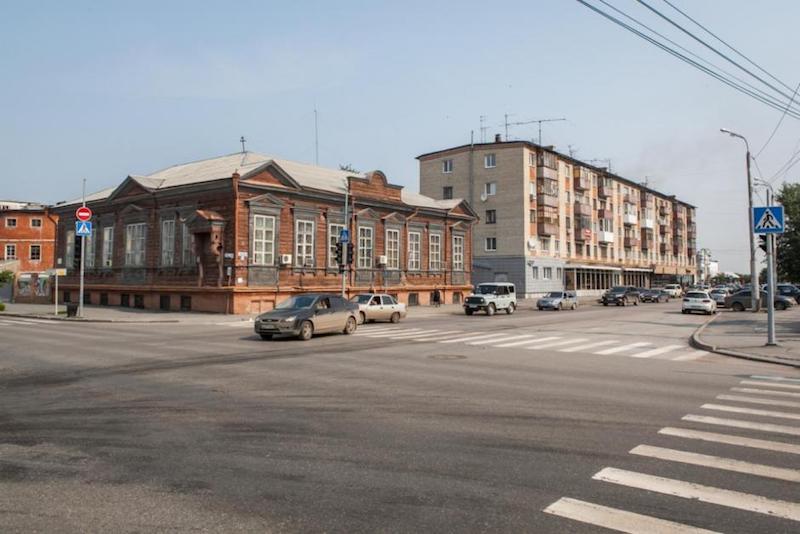 We saw many churches and visited the Holy Trinity Monastery. 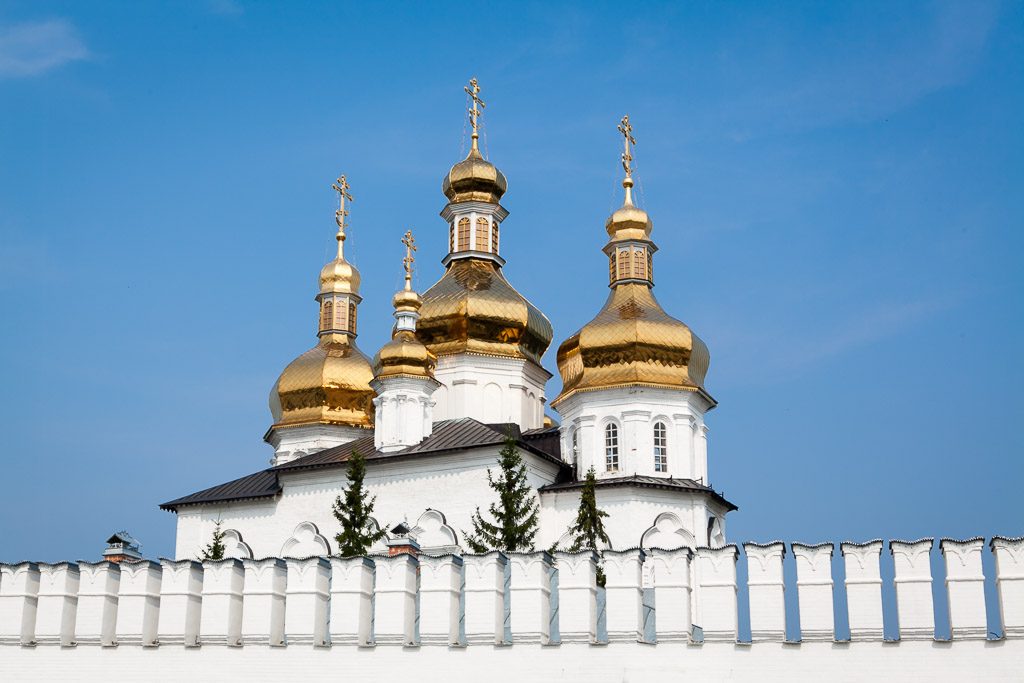 Interesting was also the walk on the banks of the Tura river. We made a stop on the Lovers‘ bridge and on the other side of the river we visited the Voznesensko-Georgiyevskaya Tserkov – an orthodox church. 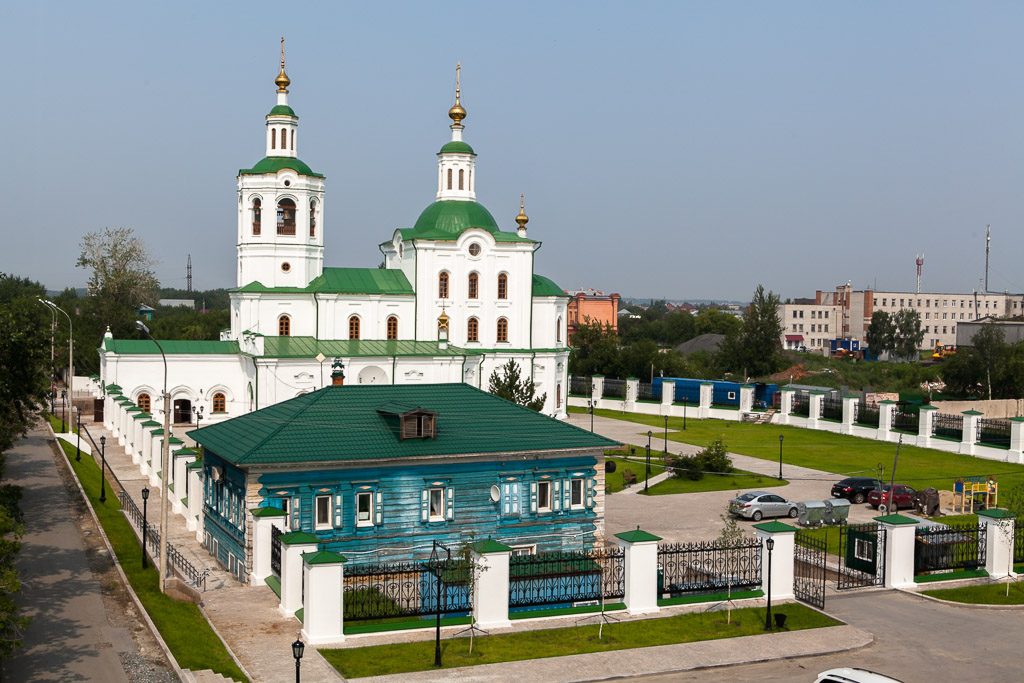 Recently the banks of the Tura river were massively reconstructed. We could discuss for a long time the reconstruction’s aesthetic contribution. Anyway, the locals are happy to use it for active relax. People come here to have a run, to do inline skating or just to have a walk. It is a popular meeting point for the youth. The elder people like to sit here on the banks. We especially liked the original display of interesting information about the city as well as about the Siberia.

There is one more curiosity in Tyumen – the lowest pedestrian underpass in the world. So you can imagine, how low it was – Tomas is 188cm tall. 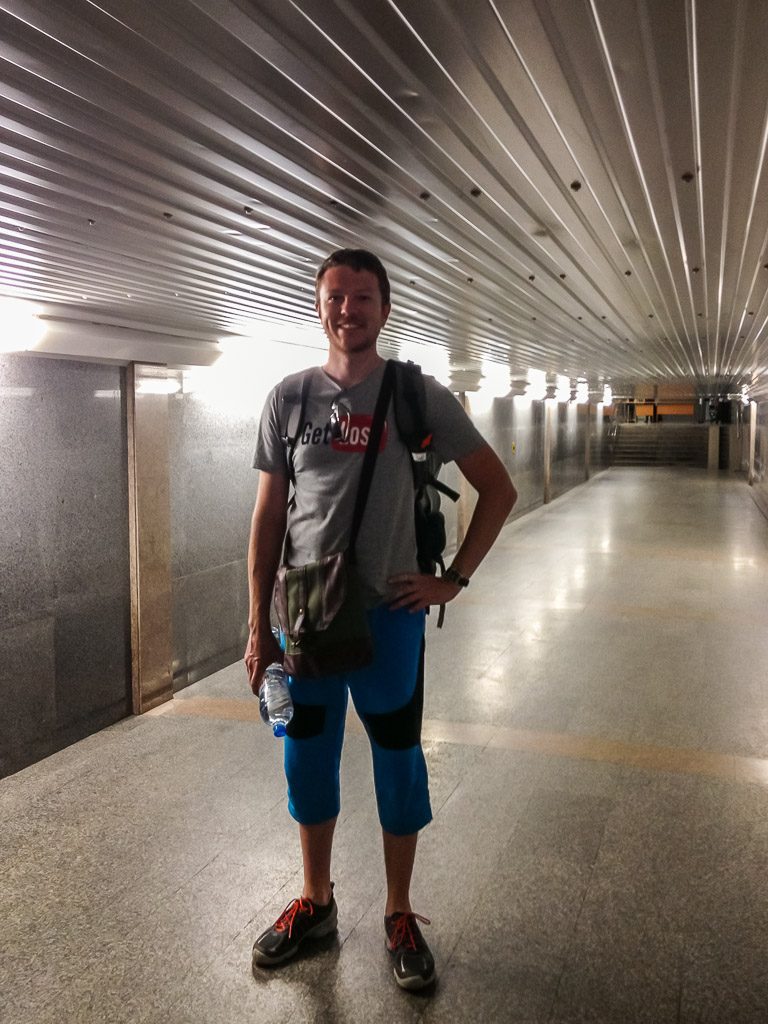 The city, that have prepared the highest number of nice surprises for us and we could imagine to live here starting from tomorrow on.

We arrived to Tobolsk at 22:45 on train from Tyumen. At that time it still was not completely dark and the first thing we saw was this not really beautiful building of the railway station. Fortunately, that was the first and at the same time the last unpleasant experience we gained in Tobolsk. There were two beautiful days in front of us. 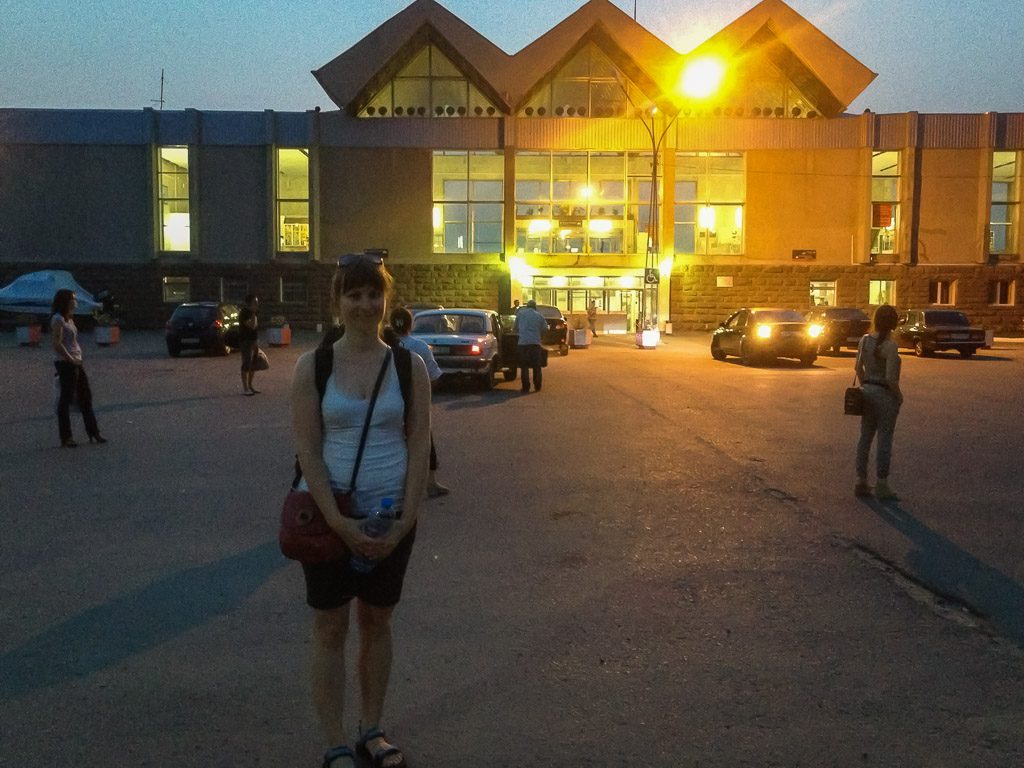 We learnt a lot about the history of Tobolsk as well as of the whole Siberia in the local Museum of Siberia. Tobolsk used to be the administrative centre of Siberia for centuries. Nowadays the city is divided in two parts – the Old city and the New city. This is underlined by the landscape of the city. The city is divided in two halves by a high and steep cliff. Underneath it as well as above it there is a flat land touching the horizon. Above the cliff there is the Tobolsk Kremlin located. It is however not the centre of the city. There are two city centres. But the Kremlin belongs to none of them.

For centuries the city was developing only underneath the cliff. Until today there have been well preserved houses built in the traditional style. These include the Governor’s House as well. It is the very same house in which the Tsar family was imprisoned in 1917, until the Bolsheviks moved them to Ekaterinburg and executed them there. Another interesting building was the local gymnasium. It is the one that visited Mr. Mendeleev. Nowadays the building still houses the gymnasium. 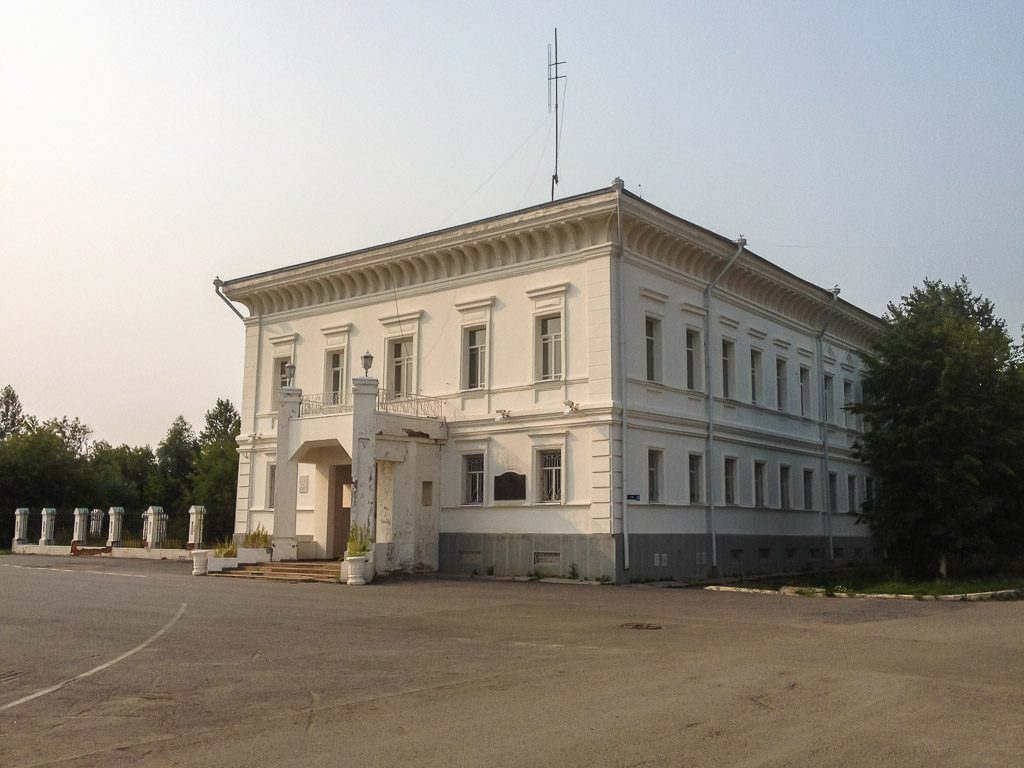 In the 20th century, a new city developed on the area above the cliff. The look of this part of the city corresponds with the particular epoch: wide streets, block houses and here and there some ugly leftover of the communistic architecture housing one authority or another. 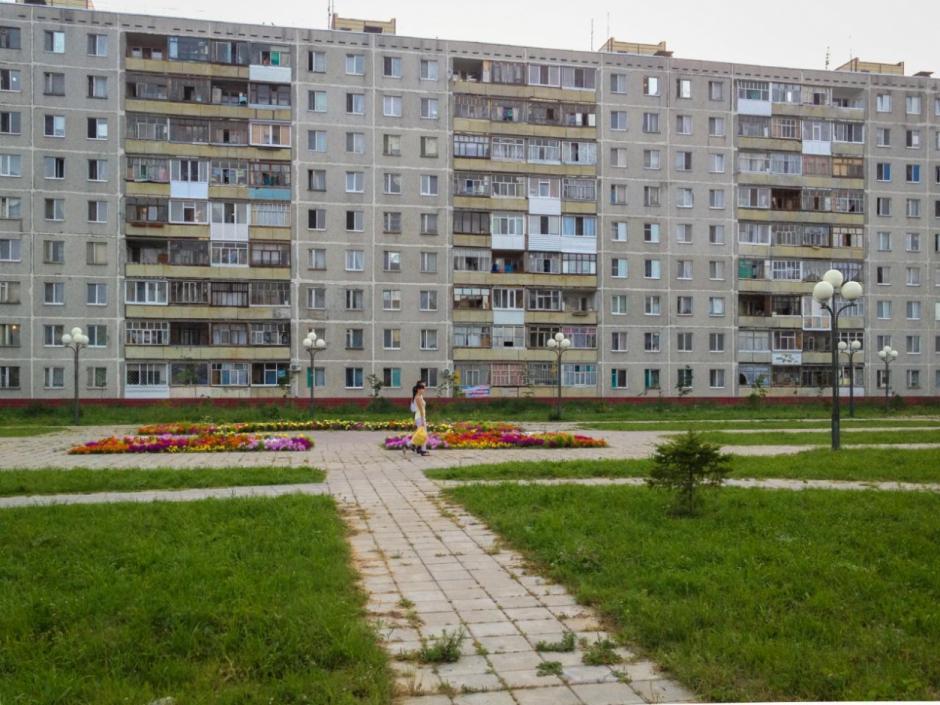 The view of the Old city from the Tobolsk Kremlin is wonderful – during the day as well as at night. 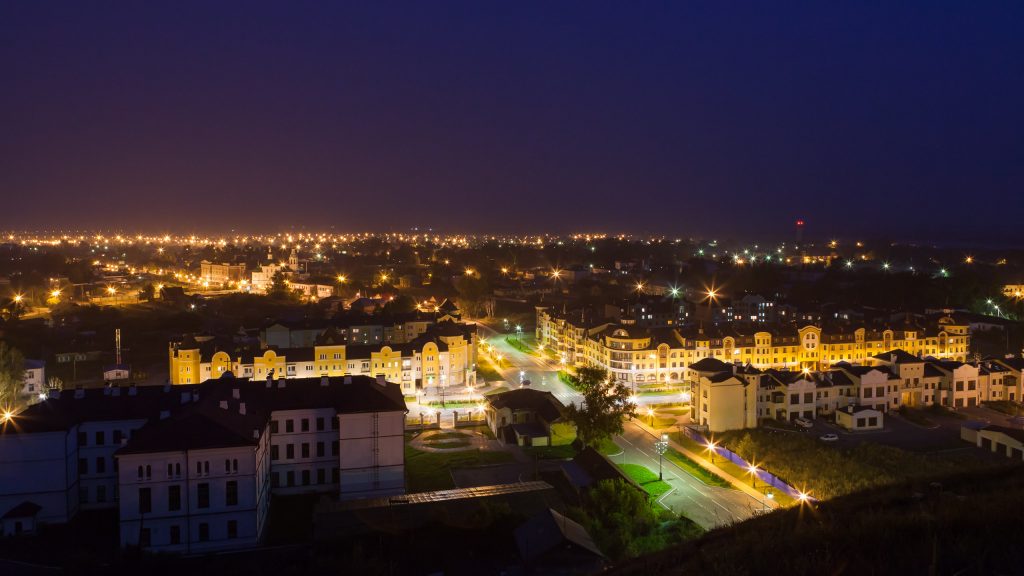 The Kremlin itself we liked a lot. Actually, there were only a few things we did not like in Tobolsk. We liked how clean the city was. That the local authorities took care of the city was obvious everywhere. The historical buildings were reconstructed as well as the park next to Kremlin. 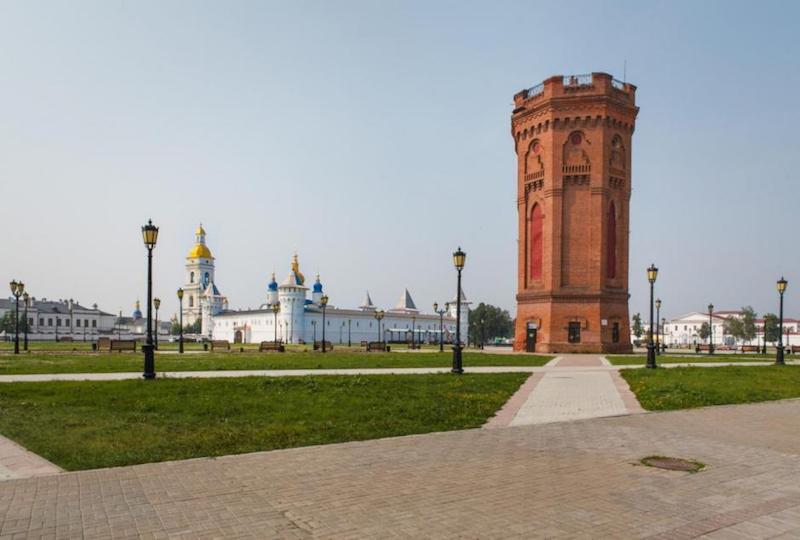 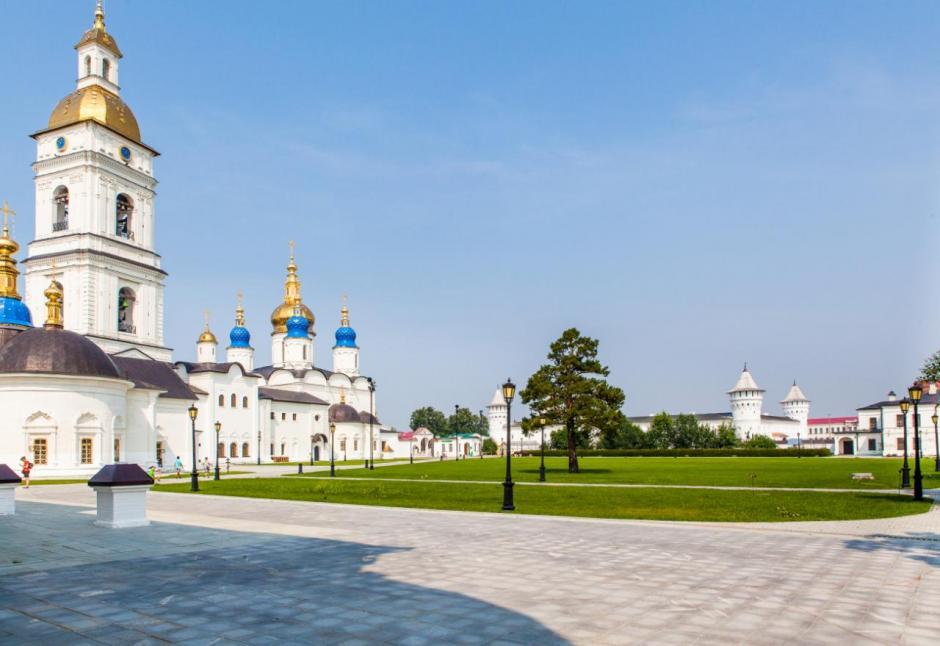 However, what surprised us most in Tobolsk were the local drivers. Drivers considerate of pedestrians to such extent we have never seen before (and in fact afterwards neither). We have never been so many times given priority on the pedestrian crossing within such a short time period like we have in Tobolsk.

Unfortunately, we did not have much time left for Irkutsk as we would have wished. During our last evening in Siberia we made a walk in its back streets, admired the architecture of the gone glorious periods. Next to them there were new houses built in the traditional style. Expensive restaurants, top brand shops, stylish bars and pubs hidden inside them. 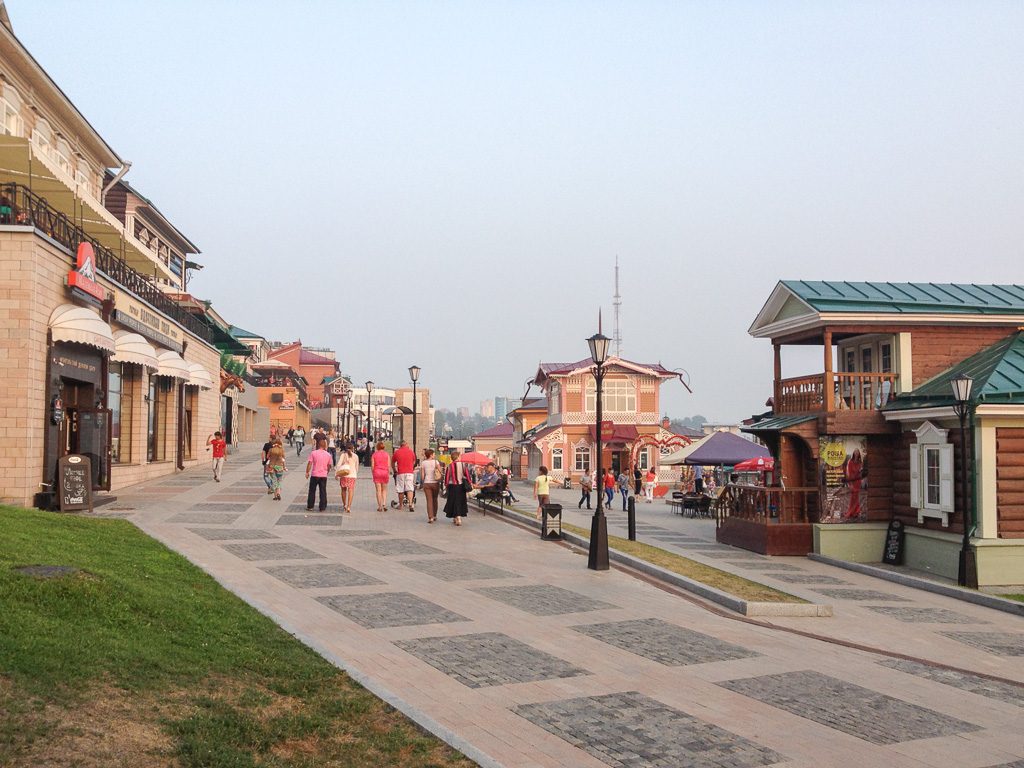 We saw the church Krestovozdvizhenskaya Tserkov, made a walk on the banks of Angara river, observed the Alexander III. Memorial.

In Irkutsk we spent two evenings – one prior to our trip to Baikal Lake, the other after our return from this trip. On the first evening we visited the local Buryat restaurant. We ordered the local beer called Arshan. How surprised we were when the waitress brought it in a beer mug branded „Zlatý Bažant“, one of the most popular beers in Slovakia. Here, more than 7 000 kilometres away from Slovakia, we drank the local beer from a Zlatý Bažant beer mug. How funny and unexpected. 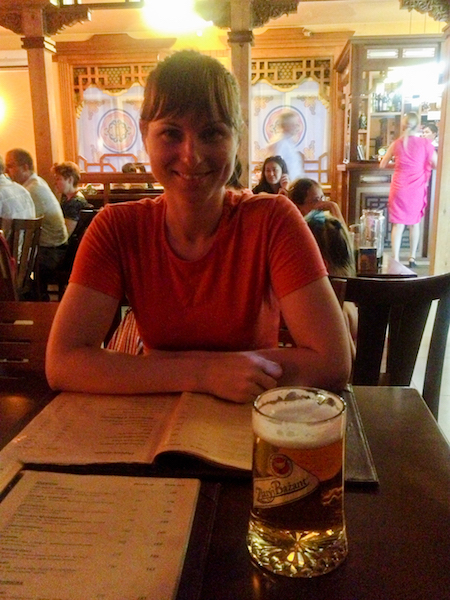 On the other evening we visited the Mongolian restaurant. At least partially we wanted to compensate our failed trip to Mongolia. The food was fantastic, the servis perfect, the Wi-Fi stable and quite quick. What else could you wish for after a week in wilderness? 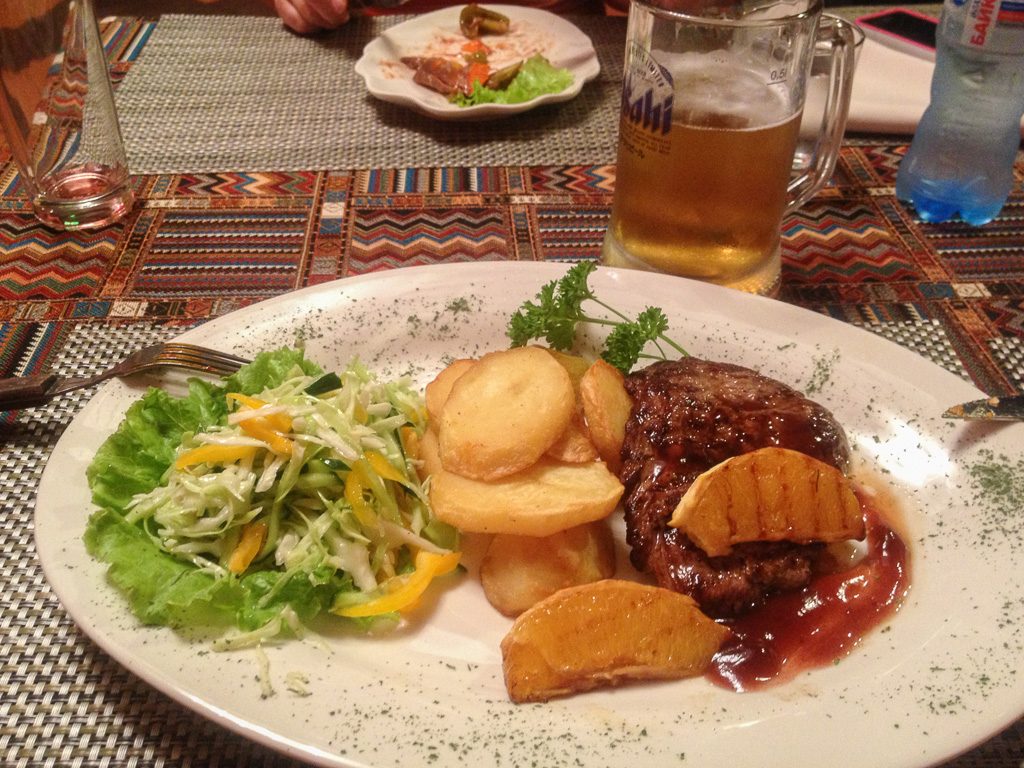