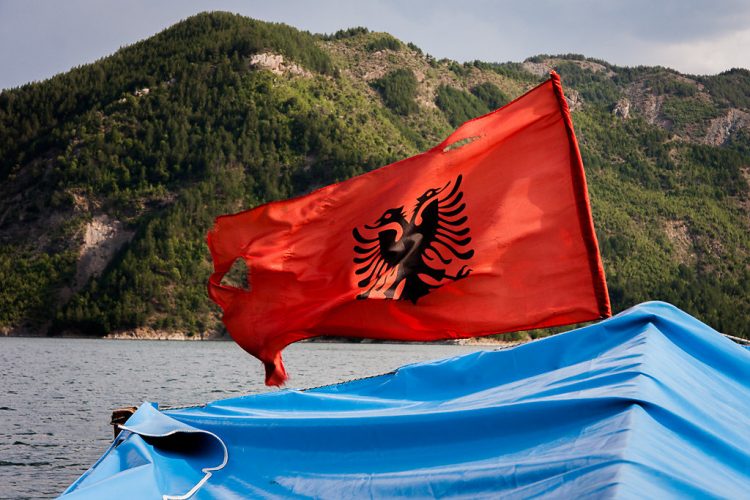 If you are short of money but dream of a holiday full of adventure as well as fun on the beach, Albania might be the right option for you. Although, maybe not for a long time anymore. Here as well the local people have discovered that their most promising asset is the beautiful sea. And so, if you want to enjoy virgin beaches that have not yet been occupied by the white bodies of Central European inhabitants and where you still can enjoy calmness and silence, hurry up. 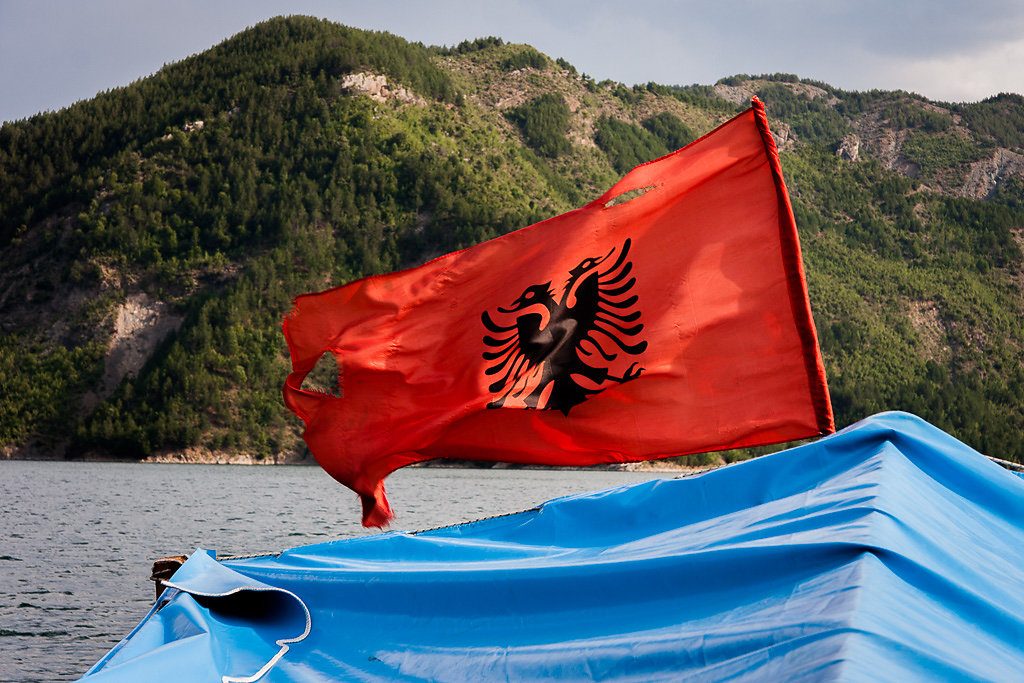 During our trip in 2012 we arrived to Albania from Montenegro and along the coast we headed to the south. We reached the boarder to Greece and then turned in order to return via inland. When entering the country, we were influenced by the prejudices that are so typical for people from the Central Europe. They know only one thing called Albanian – Mafia. In fact, people who live in Albania are very favourable, hospitable and openhearted. There are beautiful people in a beautiful country. Albania received the most pertinent attribute from the Czech travelers Horký and Návala who described their travels in Albania in a book called “Albania – a beauty with a damaged reputation”. The country has something to offer to both travelers and vacationers.

Before we entered Albania, we made a cautious exploratory trip around the Lake Skadar which is exactly in its half divided by the state border. After the beauty of landscapes we saw on the Montenegro side we decided to give the Albanian side a chance too. We were a little concerned when crossing the border since we had no idea what to expect or what to get ready for. That anyway changed very soon. The country charmed us, brushed aside all our prejudices and inspired us.

We entered Albania from the north and crossed the border in Hani i Hotit. Big surprises and some intercultural shocks arrived soon after that. More precisely, after a couple of hundred meters. The road surface changed from tarmacadam to just macadam. After another couple of meters, we just stared on what we could not believe we saw – the power-transmission pole standing in the middle of our side of the road. 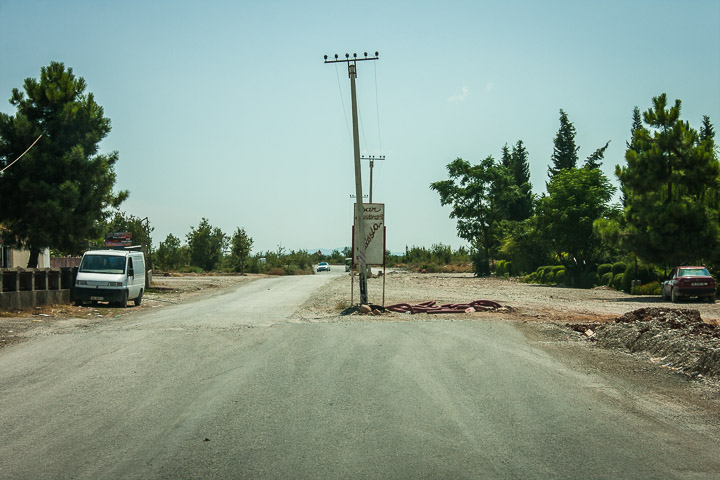 As we proceeded, it still had not been over with the surprises. It was from time to time hard to believe that we still had not left Europe.

Moreover, the symbolic statement “Go your own way” gains in Albania a completely new dimension: 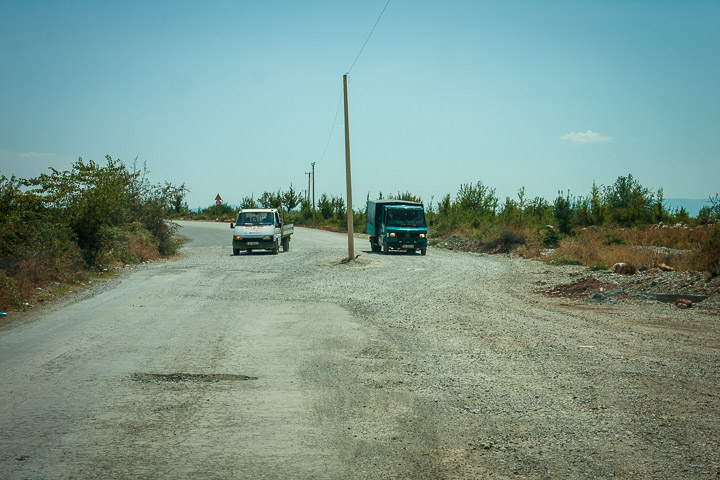 The more we moved towards the inland the more the landscape changed. The condition of the road improved. We were impressed by the mansions we saw along the road although it was quite obvious that they were empty. We noticed changes on the soil and liked its red nuance. 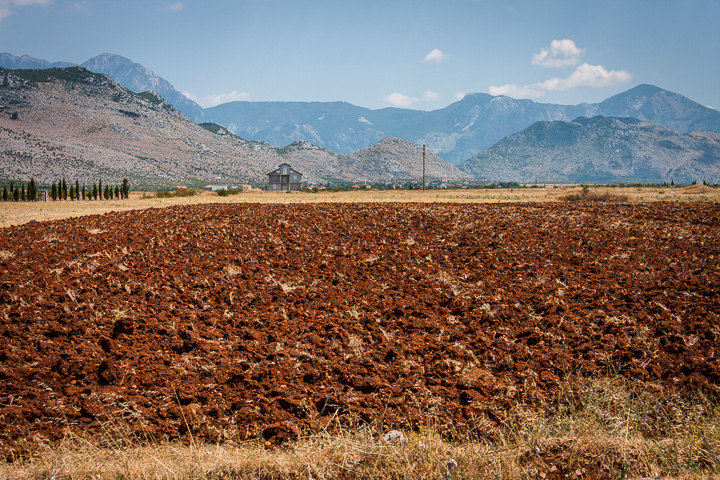 The first bigger city on our route was Shkodër. We had fun of how the local people had fun of the road traffic rules. You simply have to get used to the fact that in Albania the cyclist coming from the right on a roundabout has the priority! 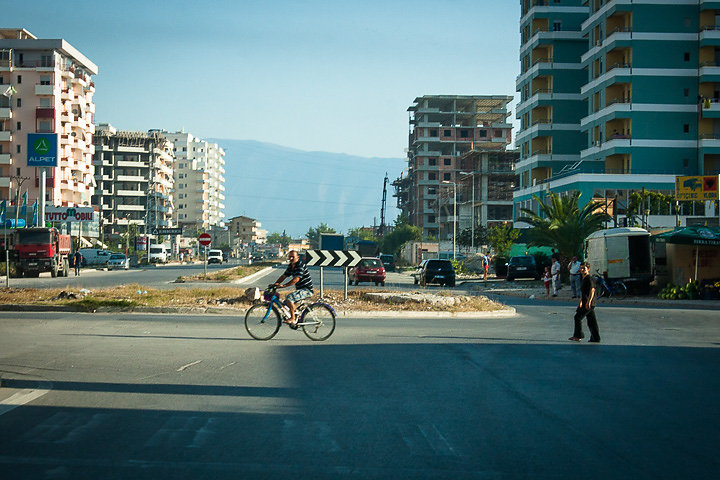 From Shkodër to Koman

We followed our route to the mountains. We headed to the town Koman located east of the Lake Shkodër. The routes in Albania are marked very good. It is practically impossible to get lost. So, even if it is a problem to get a reliable map or to rely on a GPS, you still can rely on the signs on the roads. 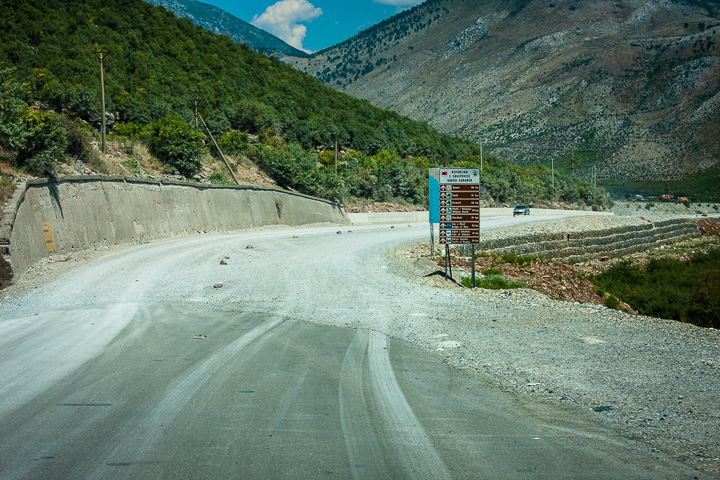 Although the road to Vau i Dejes, a town we crossed on our way from Shkodër to Koman, was in a very good condition, it got worse a bit after a couple of kilometers behind the town. We followed a road that allowed the highest speed 40km/h and the highest gear we risked to insert was three. We anyway did not mind the actual speed at all. The Drina river met us with scenes that left us breathtaken. Almost behind every curve there were views awaiting that made us to pull over, get out of the car and take pictures and take pictures. And so, due to numerous pauses we made and due to the poor quality of the road, it took us about 2 hours to accomplish the 60km ride.

After the drive full of breathtaking views and landscapes, we enter the town Koman. The number of houses in Koman can be counted on the fingers of one hand. On one of them – for some reason on the one where you would expect it the least – the inscription “Hotel” is visible from afar. We do not stop. That is not what we are looking for. We rather go on and cross the creaky bridge above the Drina river. We can already see the gigantic construction of the dam rising between two steep hills on our right-hand side. 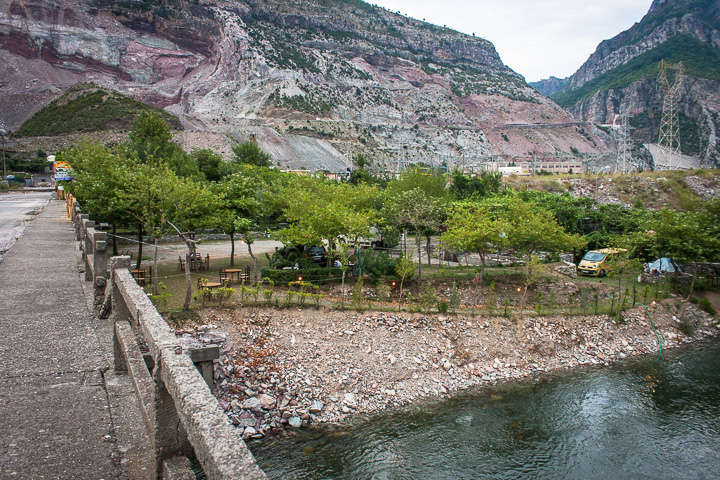 On the other side of the bridge we read an important message written on a big panel: „WHO SLEEP ON THIS CAMPING IT IS THE FIRST ON THE FERRY“. We get attracted especially by the second one: „YOU HELP US WE HELP YOU“  and so we turn to the driveway of the camping site. Behind the gate, the most hostable host and a hot candidate of the title the best camping site of the whole trip await. For 9€/night/4 persons/2 tents/1 car we found ourselves in an agroparadise. We raised our tents on the soft green grass in a fine shadow of the climbing wine grape, among leaves of which mango was growing. Instead of the alarm clock we got awaken by the cockcrow and diligent cheeping of the chicklings. From time to time we could even here the hee-haw of the donkey from the garden. And every morning the duck with the whole family marched around our tents to have their morning bath in the river. Anyway, the most active residents of this camping site were the three adorable kittens. 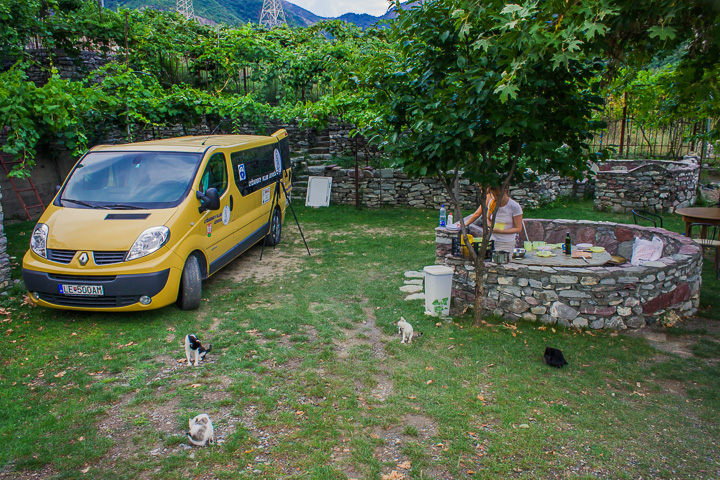 Owner of the camping site knows exactly what his guests need. The camping spots are equipped with stone tables and banks as well as with tap water.

There are also rooms available in the camping site for 5€/person/night. You can even order some food here. The accommodation as well as the restaurant are quite unique since they had been built underneath the bridge. The bridge covers the facilities as a roof. 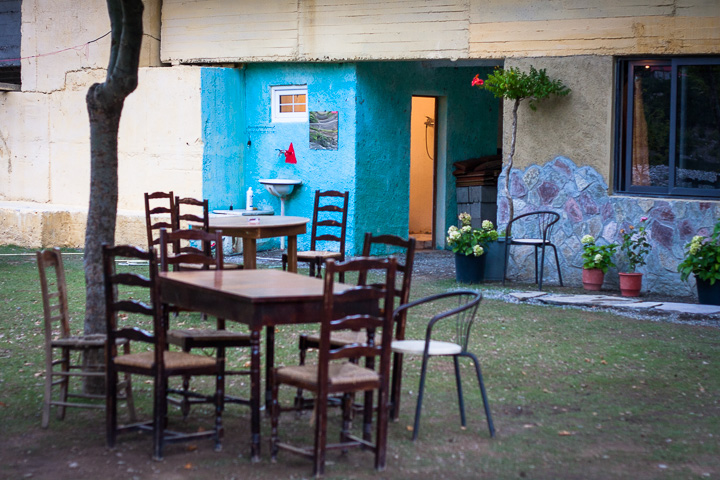 Boat cruise on the Lake Komani

We actually did not find out why Komani is considered a lake. It is a water reservoir more than 10km long that had been created by damming up the Drina river. At the time we were at the Lake Komani, the ferry transporting the passengers and cars wasn’t operating. Since we could not communicate in any language with the local inhabitants we could not find out what was the reason of this outage. We had to give up our original plan to cruise from Koman to Fierzë and from there to drive to the town Puka. And so, we bought at least a day-boat-cruise to Fierzë and back. 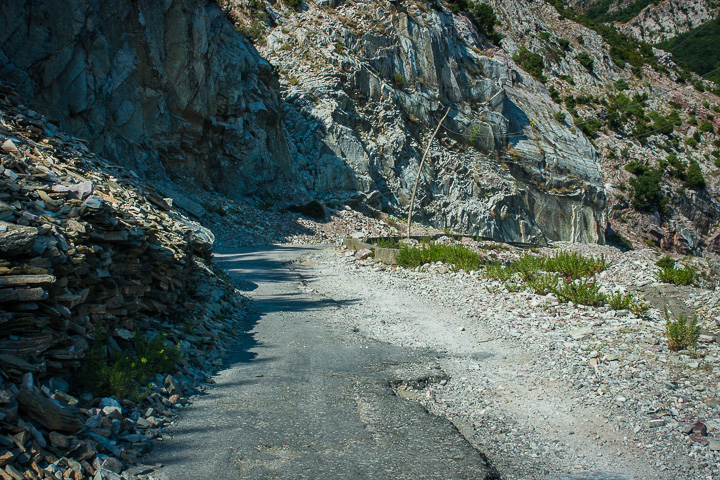 Standard price was 100€ for a group – no matter, how many members it had. Thanks to our host we could negotiate the price to 60€/4persons. In the morning, our host gave us a lift to the port. Before onboarding we visited the local bar. The bartender asked what we would have liked to have. I did not understand him really, but there were not many other options what he could have asked. He anyway pointed out in the direction of the beer. I shook my head in order to let him know I was not interested. I was quite surprised when I saw him anyway opening the fridge and taking out the beer. And then I realized what happened. In Albania, people perceive the signals with one’s head differently. When you mean “Yes”, you shook your head and when you mean “No”, you knock. And so it happened that I tasted their bottled lager beer. 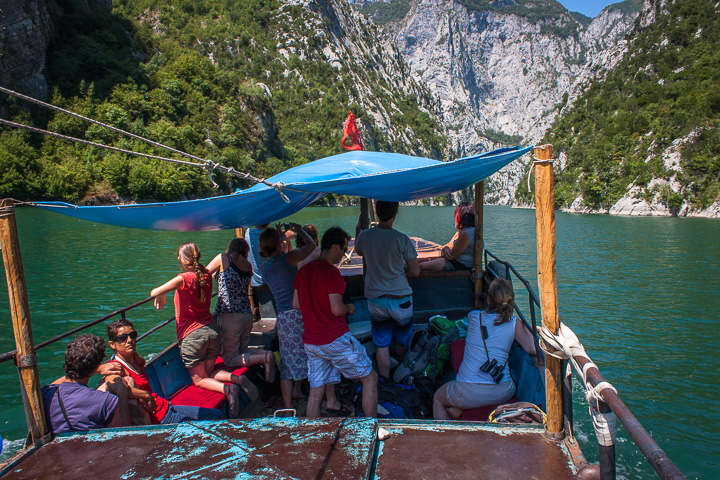 At 10:00 our taxi-boat casted off. Apart from our group, a couple of other tourists from abroad and two locals were onboard. The two locals were elder men whereas the older one attracted our attention most. He sat for three and a half hours under the hot sun dressed in a shirt, sweater, suit and a white cap, whereby not a single sweat drop appeared on his forehead. 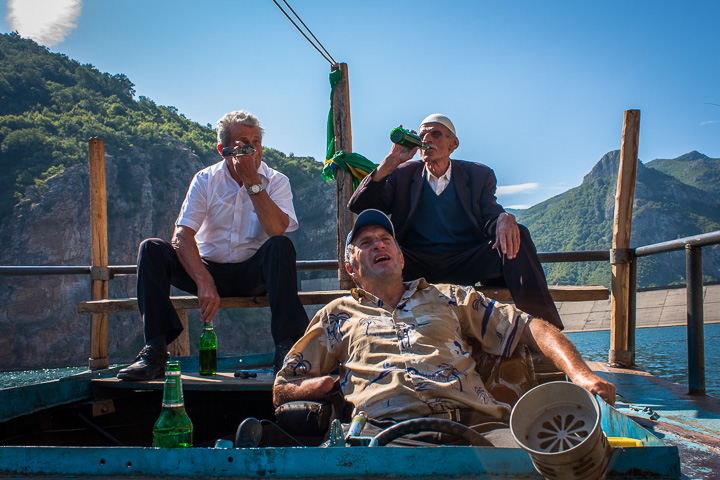 Anyway, the most interesting person onboard was captain Marko. At first sight, a common middle-aged man, dirty from oil, sun-tanned and windbeaten. However, after a more consequent observation one could notice that he looks strange by his manual activities. He was left-handed. Not by his own choice. His right arm ended a bit higher above his wrist. But that was not that strange thing that originally caught our attention. In fact, it was that we realized he was not limited by his handicap at all. No matter what activity he performed onboard his boat, it looked as if he was completely healthy. It was quite obvious that our taxi-boat – a coarse watercraft propelled by the recycled old Mercedes, such a popular vehicle in Albania – was put together by Marko personally. In order to show him our respect we bought him potato chips and a beer in Fierzë. He accepted our gift with enthusiasm. He anyway communicated only with the male members of our group. He completely ignored its female members. 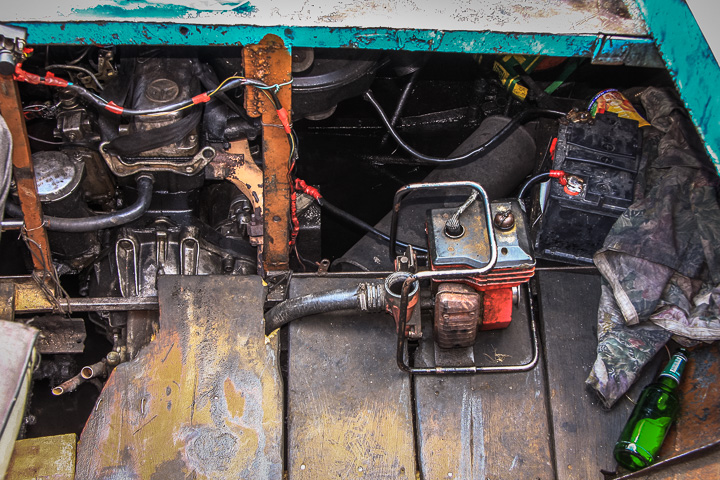 The cruise from Koman to Fierzë on Marko’s boat took about three and a half hours. We had a 30-minute pause in Fierzë. There was only one café. Its owners showed us that the fashion style of mafia members is the same on a global level. Greased hair, pervasive scent of a cheap fragrance. Bare-necked, obligatory shirt, black trousers and extravagant pointed shoes. A bulky golden chain around their neck, flagrant golden watch on their wrists as well as a couple of golden bracelets. The whole picture was completed by the golden ring on their auricular finger. Although they might not respect the law they take care of their customers exemplary. We paid 3€ for an espresso, orange Cappy and two Cokes. 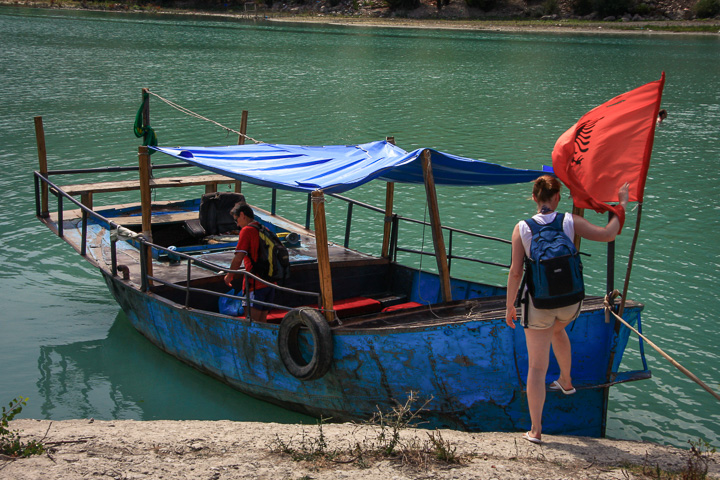 The Lake Komani Cruise is considered one of the most beautiful in the world. We absolutely share this opinion. The whole 7 hours we enjoyed the beauty and diversity of the nature surrounding us. It changes behind each curve. Most of the time, steep cliffs raise from the water. From time to time they are exchanged by green hills with houses made of stones that are surrounded by fields and vineyards. The only access to these houses was from the lake. No electricity, no civic amenities. Just rough but beautiful nature. The elementary condition of surviving in this environment is ingeniousness. You can see it everywhere – on Marko’s boat as well as on the way of cattle transportation on the lake.

There was a road construction near Fierzë. Lucky Albanians that the construction is not performed by the Slovak constructors. I do not even dare to guess how long would finishing it take if it was so. 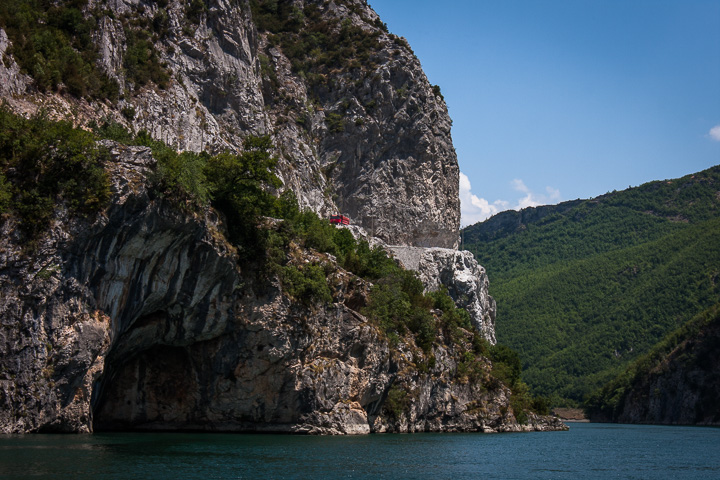 In the second part, we will take a look in Velipoje, Dures, Vlore, Dhermi or Himare. On our way back, we will not miss the Blue Eye and the city of Gjirokaster, a UNESCO World Heritage site.

You can find more photos from Albania on www.tomaskozik.com.