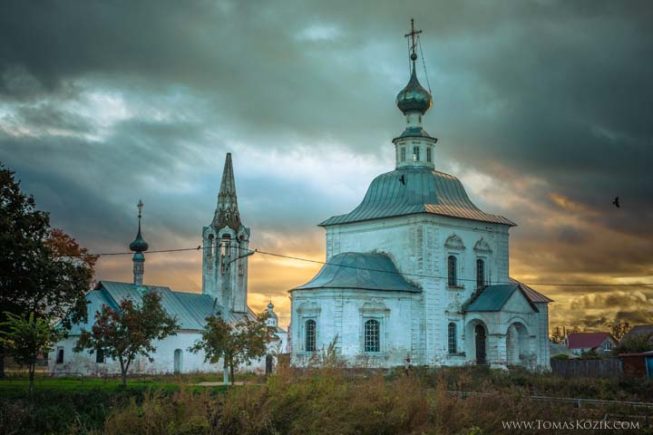 When travelling to Russia we enjoyed the pulse of the modern Russian metropolis Moscow. We were amused by the elegant city of Peter the Great – Saint-Petersburg. However, we found the real oomph of Russia and its history in two small inconspicuous cities located only 200km to the east from Moscow –Suzdal and Vladimir. We highly recommend that you also visit these two cities if you plan to come to Russia and want to see something genuine Russian.

Without exaggeration, Suzdal is the most important city of the medieval Russia. It also takes probably the first place in the world when it comes to the ratio of churches to citizens: 40 churches for 400 families. It is consequence of its historical development. After a decline in political importance, the town rose in prominence as a religious center. The industrial development completely overpassed the city and so today we can admire the beauty and novelty of its ancient buildings and sacral constructions. List of monuments that have been preserved in Suzdal until our days is very long. All of them are worth of being seen, visited, and appreciated. Since they are located on a very small area, it is more than feasible to complete this task. Apart from that we definitely recommend the following three activities in Suzdal:

Mead is a traditional drink of many Slavonic nationalities. It is produced from honey and it tastes best in winter. In Suzdal you can even buy it from grannies selling home-made treats on the street. However, in Suzdal there is also a special saloon where you can taste the variety of mead produced in the local mead factory.

Usually there are three different tasting menus on the list: traditional mead menu, herbal mead menu or berry mead menu. The tasting menu typically consists of 10 samples. The saloon itself is decorated in the traditional Russian style going back to the period of reign of Ivan the Terrible so the interior gives the mead tasting a quite distinctive character. Although this is a classical tourist attraction, we definitely recommend it.  In favor of trying it speaks even the price: 220 rubles (2,90€) for a non-alcoholic and 270 rubles (3,60€) for an alcoholic tasting menu.
You can find the tasting saloon in the shopping arcade next to the river Kamenka. Here is the address: Lenin’s street Nr. 63, Suzdal

As already mentioned, Suzdal was completely overpassed by the industrial development. Additionally, since 1967 the city is protected as a national monument. That is the reason why a walk in the streets of this cute city gives you the experience of time travelling. Small wooden houses with beautiful traditional decorations, each painted with a different color provide this place with a unique and distinctive atmosphere. 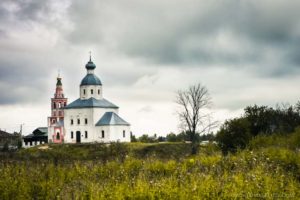 The most interesting thing Vladimir can offer is its history. Even if you are not a history geek, you will be impressed by the ancientness of the place. In Vladimir you can feel the oomph of the olden times and you will be touched by the cleverness, talent and craftsmanship of its ancient citizens. Its origin goes back to the 12th century. The city was founded in 1108 by Vladimir Monomakh, prince of the Kievan Rus. Originally used as a fortress and a defensive outpost, Vladimir increased its significance during the reign of Monomakh’s son Yuri Dolgorukiy and under the reign of his son Andrei Bogolyubsky the city became capital of one of the biggest Russian principalities. The Golden Age of Vladimir lasted until the Mongol invasion of Rus in 1237. There are only three architectural monuments left from this period:

All three are definitely worth of your attention. Here is why. 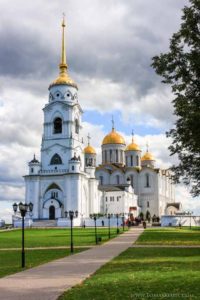 The Dormition Cathedral standing at the highest point of the old city represents its dominant. Although looking majestic from outside, it is its interior that will stun you. The cathedral was constructed at the same time as the city was founded. All notable Rus’ princes including Andrei Bogolyubsky or Vsevolod the Big Nest as well as orthodox bishops and metropolitans were buried here. The biggest highlight however the cathedral offers are the paintings of Andrei Rublev. The most talented icon-painter of all times decorated the walls of the cathedral in 1408. 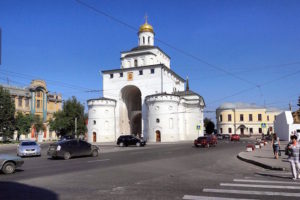 The Golden Gate was erected by 1164 and survived the Mongol destruction of Vladimir in 1237. Although called golden the gate was not produced of gold. It was wooden and covered with gold-plated copper. Unfortunately, the original look of the gate has not survived until our times. By the late 18th century the structure had deteriorated to such extent that Catherine the Great had once refused to pass through the arch. She was afraid that it could tumble down. And so in 1795 it was decided to demolish the vaults and the barbican church. Nowadays The Golden Gate is one of the most important sights of the city and home of the museum dedicated to the military history.

The Cathedral of Saint Demetrius is a unique architectonical construction that does not have any analogues neither in Russia, nor in Europe. The exterior of the cathedral is covered with 600 stone plates. Carved on them are scriptural figures as well as real persons, scriptural scenes as well as natural scenes that remind of the traditional embroidery. Watching that precise beauty you will refuse to believe that it was erected by the end of the 12th century and survived until our times.

How to get here?

From Moscow to Vladimir you get either by train or by bus. To Suzdal you can get by bus from Vladimir.
Trains from Moscow to Vladimir leave from the Kursky rail terminal (subway station Kurskaya of the Arbatsko-Pokrovskaya line and Koltsevaya/Circle line; subway station Chkalovskaya of the Lublinskaya line). The most economic variant is the local train called “elektrichka”. It takes about three hours to get to Vladimir. You can also travel by bus. Buses leave from the Scholkovsky bus terminal (subway station Scholkovskaya of the Arbatsko-Pokrovskaya line) and the ride takes as well about three hours.
The most convenient way of travelling from Moscow to Suzdal is to get to Vladimir and then to continue to Suzdal by bus. The buses go daily almost every half-hour from 6.30 until 21.40. They leave from the Vladimir bus station located on the following address: Vokzalnaya Street Nr. 1.