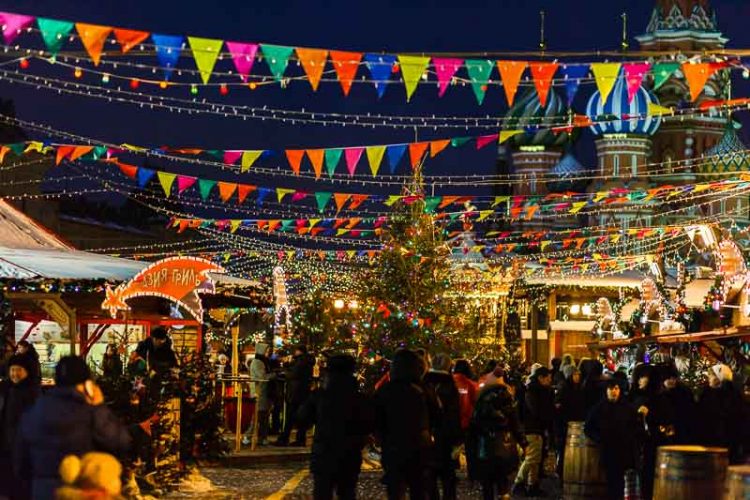 Russia has been for ages a regular destination of our travels abroad. The cause is my developed russophilia. If you once start to study the Russian literature, get familiar with the Russian culture and deepdive in the nuances of the Russian history, you will for sure suffer the same disease. As do I. Hold on with your regret however. It brings some advantages as well. It will upgrade you from the level of an ordinary tourist visiting the tourist attractions, admiring the historical and architectonical monuments or expositions of museums to a level of connoisseur of the local situation and circumstances, local habits and customs, to a level of an almost native speaker and a natural participant of important events.

We have been in our Russian friends’ pocket for a long time now. Thanks to this fact we could experience the New Year’s celebration in Russia for the second time already. The previous time we were invited to Syktyvkar, the capital of Republic Komi. We have written a blog about it (unfortunately, it is available only in Slovak). This time, i.e. in 2016, we were invited to Moscow.

We arrived by plane on 31st December 2016. This way we found our selves in medias res of the preparation for the festive evening. The preparation included cooking of traditional dishes, decorating the tree, packing the gifts. In the background the TV was on where the most popular movie Irony of Fate or “Enjoy your Bath” was going on. For the Russians the movie is a substantial part of the New Year’s Eve.

People are the same everywhere

Whatever the politicians would like us to believe, it is clear that there are no differences between the Slovaks and the Russians when it comes on the basics. Here is a very demonstrative example of the natural division of labour in terms of preparation for the New Year‘s Eve celebration.

This is a good opportunity to explain the difference between how the New Year’s Eve is celebrated in Russia and in Slovakia. The Slovaks say good bye to the departing year together with friends in a very “party” way. In Russia the celebration is similar to what the Slovaks do on Christmas. On 31st December the Russians usually decorate the tree, place the gifts underneath it. For them it is an opportunity to gather the whole family at one table set in a festive and rich way. Of course, there is enough of those who prefer to celebrate the New Year‘s Eve in the streets. Especially in Moscow the offer where to go is huge. Interesting and amusing program awaits the Moscowians as well as the capital visitors not only on the Red Square but also in the parks and on the ice rinks. Whether at home or in the streets, the bottles of champagne are being open at midnight, people hug and kiss each other, wish each other „new luck“ in the new year and that everything will be fine (С Новым годом — с новым счастьем! Пусть все будет хорошо!). 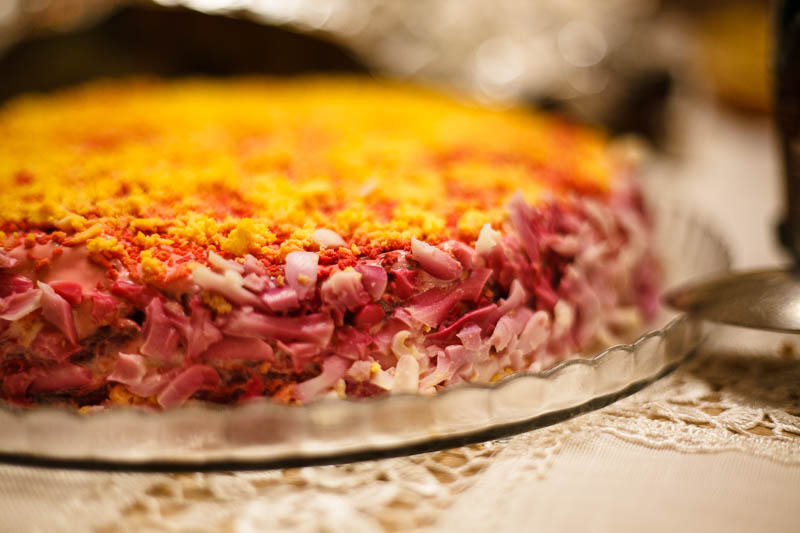 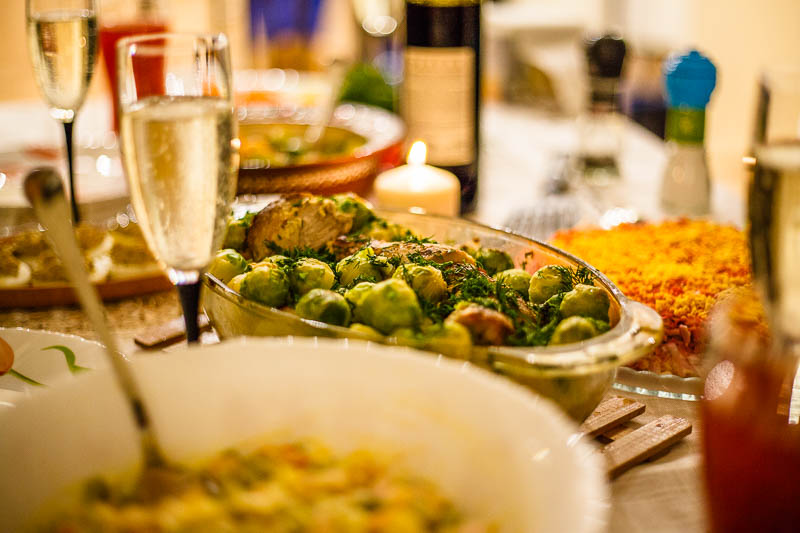 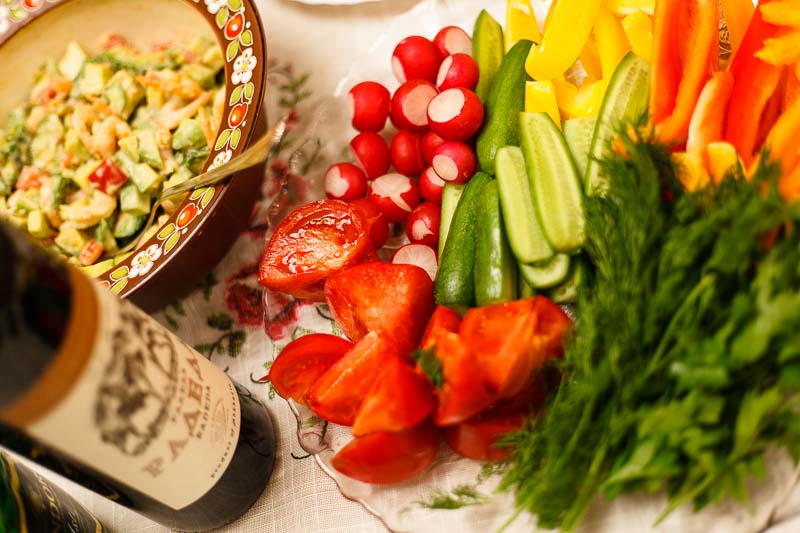 Unconventionality of this New Year’s Eve subsisted in the formation seated at the table. No family, just close friends, although international. 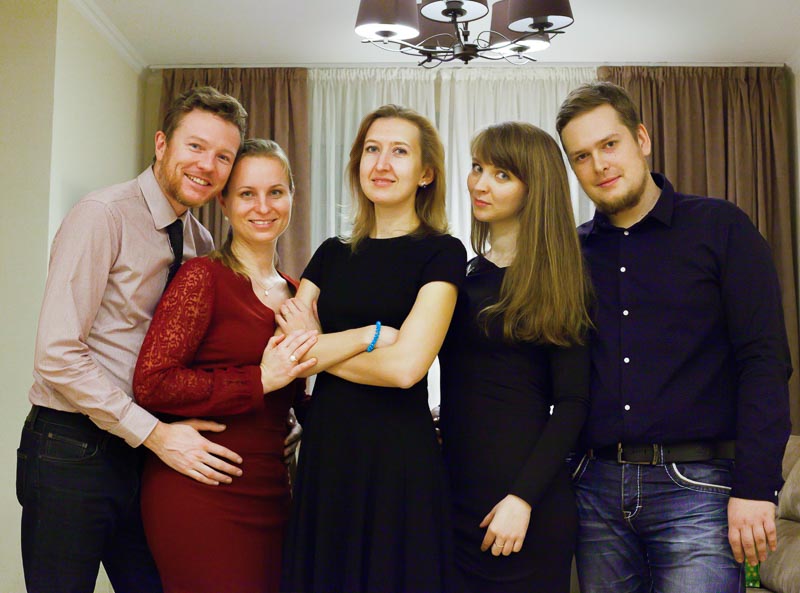 After the dinner we could finally move to the tree and unpack our gifts. From Father Frost (Дед Мороз) we got a couple of exclusive gifts. The most impressive one was a framed embroidery produced by our host personally. We also received a special tea called in Russia Ivan-tchay. It is produced of a plant that has many positive effects on human health. It occurs especially in the North. Another extraordinary gift we got was a set of traditional Russian preserves. You may say: „What? A preserve is an extraordinary gift?“. Well, these pieces are really exclusive. Or have you ever heard of ceder nuts preserved in a pine sirup? Or a compote made of pine cones? These are russian specialties unprecedented in our region. 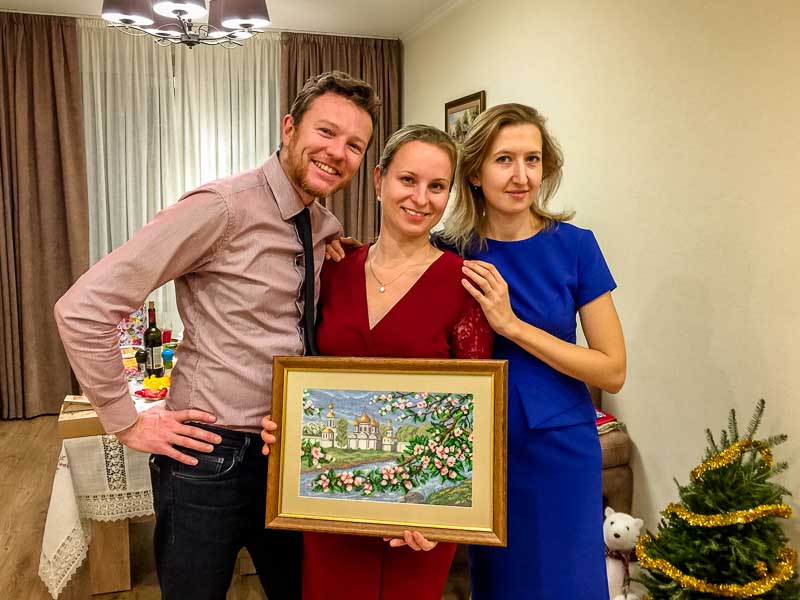 Shortly after we unpacked the gifts the midnight came. From the TV we could here the sound of the Kremlin clock. The time has come for another tradition. Before the last strike of the clock it is necessary to make a wish. The magic power of the New Year’s Eve will ensure that the wish comes true. That is however not all. During the strikes of the Spasskaya tower clock it is necessary not only to make a wish but as well to open a bottle of champagne, fill the glases and clink them in order to welcome the upcoming year. This might be a tough logistic challenge to manage all those activities in such a short time. We however made it. After that one toast after another were recited. That is actually another Russian peculiarity. In Russia you never drink just like that. You always have to have a reason to drink. And so each round has to be justified by a toast that explains the reason.

A couple of minutes after the midnight Vladimir Vladimirovitch alias Mr. President approached his fellow citizens through the TV screen. It is fascinating that the Russians really follow his New Year‘s speech and never miss it. On the other hand, Vladimir Vladimirovitch never bothers them longer than three-five minutes. He sais what is necessary and lets people continue the celebration, enjoy the splendid fire works and open still new bottles of champagne. No wonder that all of them love him. 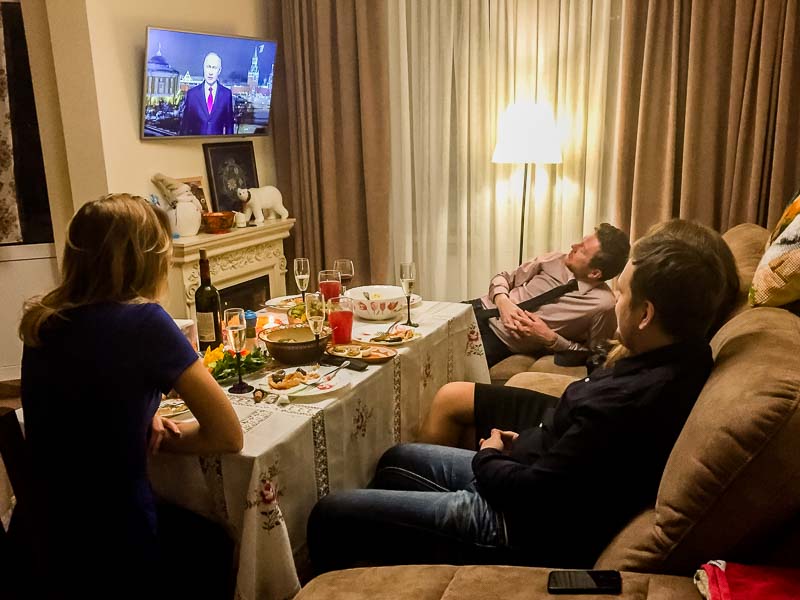 What happens after the midnight is usually a subject to strict censorship. Unfortunately, there is no need for censoship in our case. During the New Year‘s Eve we still fought against the flu virus. We went to bed before two o‘clock and not even our way to bed was “wild”.

Despite this fact we will always remember this New Year’s Eve as a special one. Although the Russians have reputation as inaccessible, taciturn and harsh people we know that it is only a protection camouflage. Behind it there are people with good hearts, open minds, honest hospitability and frank friendship.

We were guests of our friend in Moscow. That is why we cannot provide you with complete information on the cost of such trip to Moscow. On the other hand we still can give you a couple of useful tips and hints.

Typically, the tourist visa to Russia is given for 30 days and costs 35€. All requirements you have to meet in order to get a Russian tourist visa are listed on the site of the Russian Consular Department in Slovakia. Visa is usually issued within 10 days. If you want to apply for a visa in the office of the Russian Consular Department you have to book a concrete date and time via the electronic appointment booking system. It is however highly probable that all appointments are already booked. This is at least what happened to us. In such case you have no other choice than to apply for visa via VHS Slovakia. Their services are however charged. Apart from the 35€ fee you will have to pay additional 25€ per visa as a service fee. In our case the final cost of two tourist visa to Russia was 120€.

At the moment it is possible to fly to Moscow directly from Bratislava. Regular connection is operated by Pobeda Air. It is a lowcost airline and so the airline tickets are cheap. The price for one way starts usually at 49,90€. Where they earn money are the fees for baggage, cabin baggage and onboard seat selection. We paid for two return tickets to Moscow 198,80€.

The easiest way how to get around in Moscow is to use the subway (in Russian it is called „metro“). Ticket for 20 rides that can be used by more persons (we bought this one for both of us) costs 720 rubles (that is 11,40€ by exchange rate 63,11 rubles for 1 euro). With this ticket you can also use other means of public transport – bus, tram, trolleybus or monorail. If you live outside the walking distance from the nearest subway station the most convenient and the fastest way how to get to subway is to take a marshrutka. It is a minibus operated by a private company that will drive you for a fee (usually 50 rubles) using the same itinerary as the bus. The advantage is that the minibus stops on demand anywhere – also outside the bus stops. And you get to your destination faster.