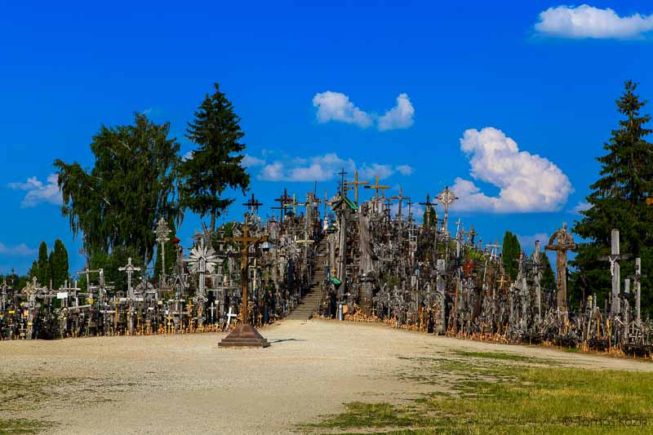 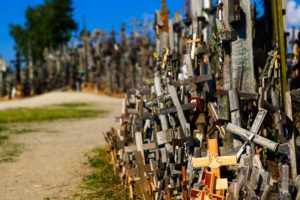 Hill of Crosses in Lithuania is a place with very strong story. First crosses appeared here after the unsuccessful 1831 Uprising. The Lithuanians rebelled against Russian authorities since they were not keen of being  part of the Russian Empire. Many rebels were killed and their families had no information where they were buried. And so they started to raise crosses above the symbolic graves of their beloved ones on one of the hills near Šialuiai. 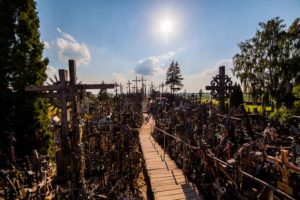 The Hill of Crosses took on a special significance during the period of soviet occupation (1944-1990). Lithuanians kept coming to the hill and raised more crosses in order to demonstrate their allegiance to their national identity, religion and heritage. That was not acceptable for the soviet authorities and so they made a couple of attempts to destroy this venue. They removed all the crosses and bulldozed the area. Afterwards they covered it with garbage in order to discourage people from coming again, raise crosses and demonstrate their peaceful resistance in this way. It was useless. Lithuanians did not stop. 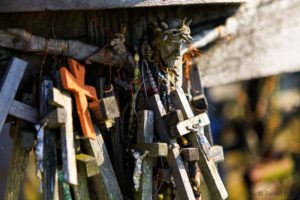 Currently, the hill remains under nobody’s jurisdiction. People are free to raise crosses here. And they do. The number of crosses placed on the Hill has exceeded 100 000 in 2006. We have spent an hour at the venue and saw at least three new crosses being raised.

Nowadays the original idea of The Hill of Crosses vanishes. The venue has become a pilgrimage destination for people from all around the world. The aims they arrive with are various. But the idea of leaving a cross on this place is obviously irresistible for many. And so the hill has disappeared underneath of the hundreds of thousands of crosses of all possible sizes, shapes, styles, made of all possible materials, coming from all known corners of this world and carrying all possible messages and prayers. The symbolism and the message of this place are both buried together with the hill under the thick underbrush of crosses. 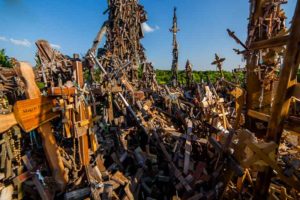 Although we cannot anymore, we hope anyway that there are some people left who still can see in this venue what the Pope John Paul II saw – a place for hope, peace, love and sacrifice.